Welcome to Part 1 of Teaching the Alphabet! I receive several emails a week, asking for advice on how to teach letters and/or letter sounds to children from Pre-K through 1st grades.

So, today I’m going to share a few ideas for teaching kids in this age-range. If you have a younger child (toddler age), I share more tips about teaching toddlers the alphabet in this post. 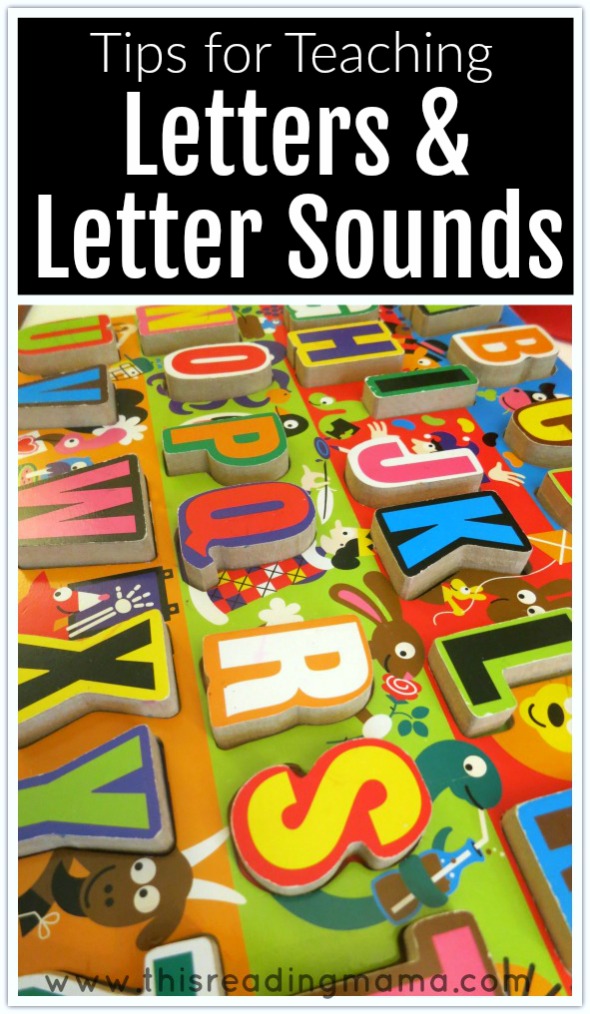 Note that I’m going to explore some hot topics in regards to letters and letter sounds. You may completely agree or disagree with my teaching tips. Ultimately, you have to find what works best for your child and stick with it.
*This post contains affiliate links.

I believe, after reading the reading research out there (such as Ehri, Invernizzi, Cunningham, Calkins, and McBride-Chang), that BOTH letters and letter sounds are highly useful for teaching kids to read and write. 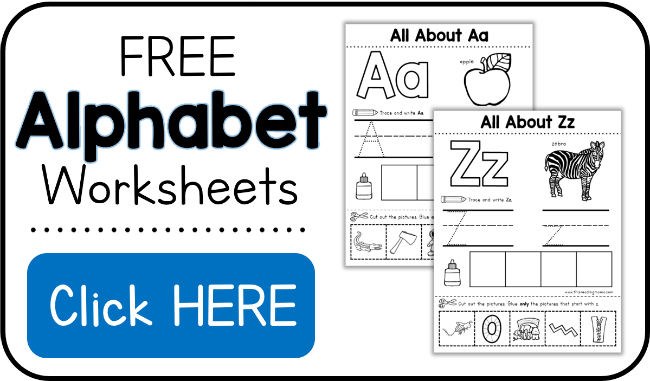 Just three of many reasons I believe this (I would probably bore you with all my reasons):

1- The majority of letter names give the child a huge clue as to the sound (or one of the sounds) they make. For example, the letter D has the /d/ sound at the beginning and the letter F has the /f/ sound at the end. W, Y, and H are the only three exceptions.
2- Letter names make great labels for letters, as many of the letter sounds are harder to make in isolation. For example, b’s sound in isolation tends to sound more like /buh/, which can make blending it with other letter sounds difficult for beginning readers.
3- Letter sounds are more abstract and aren’t as consistent as letter names. Take for example the A in Target. In my experience, it seems more consistent to say, “Oh, I see the letter A in Target,” than “I see an /a/ (short a sound) in Target…but it doesn’t make the /a/ sound. It makes the /r/ sound.” Huh?

No matter what you believe in regards to letters and letter names, “research has established that children who know the names of letters learn letter-sound associations more readily than those without letter-name knowledge.” (Words their Way for PreK-K, 2014)

Again, you’re going to hear me say BOTH! Kids need both upper and lowercase letter instruction. While lower case letters are more common in reading and writing, both are needed. If you’re teaching young children, I suggest starting with uppercase letters. Why? 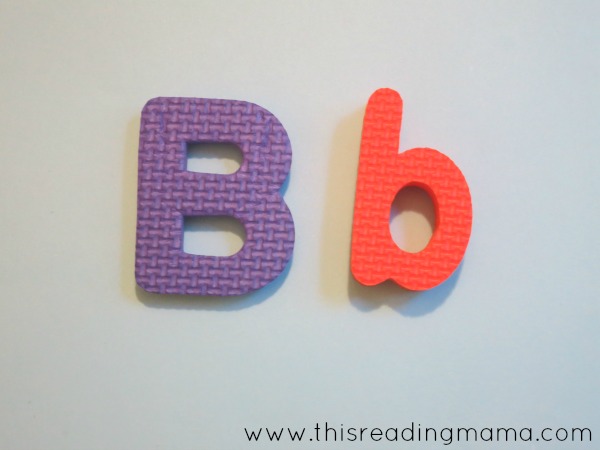 But please hear me say that while I may start instruction with uppercase letters when working with young children, I believe it’s important to expose young children to all kinds of letters, even different kinds of fonts. Pointing out and talking about the kinds of letters you find while reading together, also known as print awareness, is a GREAT way to integrate this into what you’re already doing (both for younger and older children).

While some may teach letters in alphabetical order, I believe there is a more developmentally appropriate way than starting with a and ending with z.  I like to introduce letters and letter sounds in a different order, which can help to minimize confusion. 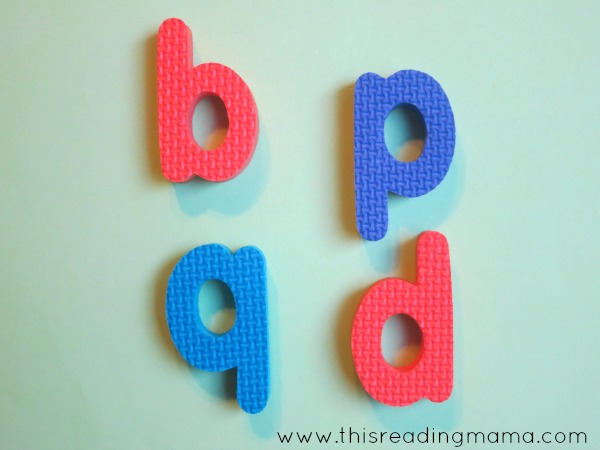 Some letters look very much the same (such as b, d, p, and q or W, V, Y). And kids confuse these often, even older kids. I encourage you to separate these letters and teach them at different times to minimize confusion.

The Point of Articulation

While this may sound fancy, it’s just a way of saying that some letters, while they look very different, have sounds that are produced in the same part of the mouth. Take for example g and k. Both sounds are guttural (produced in the back of the throat). If you say a /g/ sound without using your voice, you get the /k/ sound. Other letter sounds to avoid teaching together are t and d, f and v, or b and p.

Some kids (I have two of my own) have difficulty with the production of certain letter sounds. These letters may include f, j, l, r, s, v, y, or z. While I am not an expert in this field, I do know that speech delays can delay letter sound learning, spelling, and reading. Two of my favorite resources for helping kids with articulation issues has been Katie of Playing with Words 365 and Reading with TLC’s Lively Letters.

Letter of the Week?

Letter of the Week has gotten a bad rap. I’ve even advocated against it at times. My thoughts are still mixed on the topic. And I’ll share why. 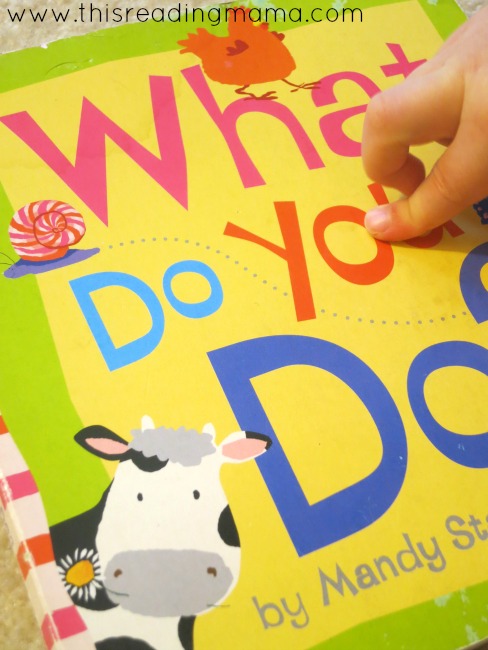 In what order should we teach letters? The first place I always start is with the child’s name. A child’s name carries great meaning to them and a sense of identity. After that, I teach letters OUT OF ORDER. The order in which I teach them depends on the age of the child. Most kids can sing the ABC song by the age of 2 or 3. They already know the order. By teaching the letters out of order, you are ensuring that kids know them out of the context of that song. When asking kids, “What’s this letter?”, we want children who do not need to sing the ABC Song to figure it out (I’ve seen lots of kids do this, even in Kindergarten).

With Reading the Alphabet, I decided to pick letters that were visually and phonetically different, but were also easier to write first. I also chose to add vowel instruction in early so that kids could begin to form words with the letters, like you see in Lesson 7 (AT Family). While each week features one letter, you will see that we studied more than that letter every week, sometimes sorting multiple letters and sounds at one time. But, no matter the order you choose, you want to choose letter combinations for teaching that will minimize confusion.

More Resources on Teaching Letters and Their Sounds: 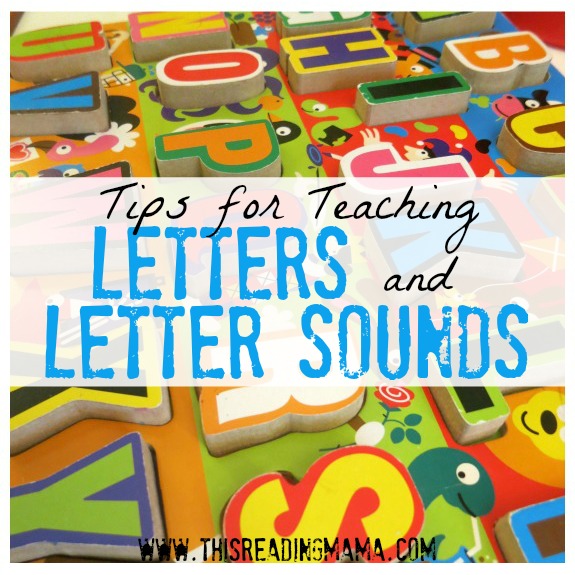 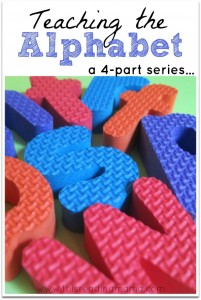 You can find all the post in this 4-part series by clicking here or on the image above.