Concept sorts are a great way to integrate vocabulary and literacy into other content areas. Just recently, my Kindergartner and I did our own concept sort with with buttons, which led to more sorting fun with buttons (these activities were NOT all done on the same day).

Beforehand, I thought through a few categories of how buttons could be sorted. My categories included: shape, size, color, texture, sheen, & a miscellaneous category.

*Grab a free printable chart with plenty of room to write your own button sorting categories at the END of this post.

Step 1: What are the Attributes? 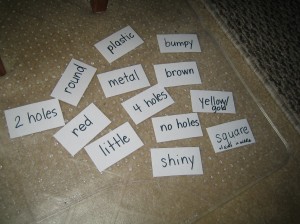 I picked out five buttons that were very different from each other in regards to their attributes. I gave one button to him at a time and asked him to describe the button. As he described each button, I wrote down his descriptions on separate cards (see above). 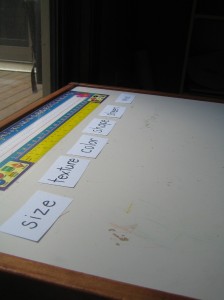 Once he had described each button, I gathered my categories (size, texture, etc.) 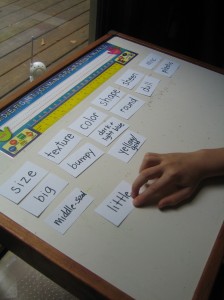 and asked him to help me sort his descriptive words under each category. We included things like number of holes in the miscellaneous category. 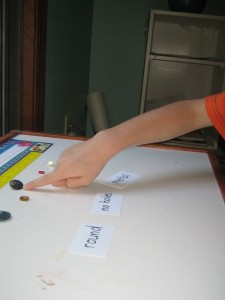 Once we had sorted & discussed the different attributes, I lined up the five buttons in a row. Then I picked three of the attribute cards to describe one of the buttons. His job was to read the three attributes and guess which button I was describing. 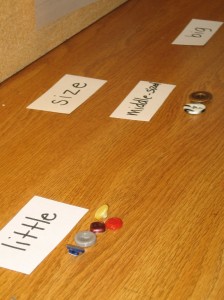 The next step in our concept sorting with buttons was picking a category (color, size, texture, etc.) and sorting the buttons by that category. We worked together with our stash of buttons and used our attribute cards to label each pile of buttons. 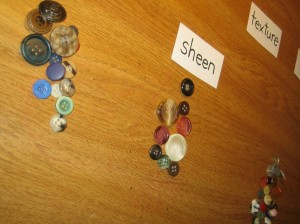 Now, we worked “backward”. Instead of telling the attributes beforehand, we tried an open sort. I sorted the buttons by a certain attribute and he had to guess my category. Then he tried, while I guessed his rule.

The last thing we did with our button concept sorting was a little game of “It’s Not Like the Others”. 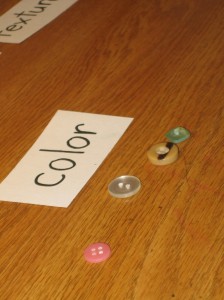 I placed four buttons on the table and he had to not only figure out what attribute I was using, but which button out of the three didn’t share the same attribute. (In the picture above, the brown button doesn’t fit because it isn’t a solid color like the other three buttons.)