Since this summer, I have used the letters already up in our playroom to post pictures that go along with each letter that NJoy has studied.  You can read more about how I did this here.

Around Christmas time, he began getting very curious about how certain letters spelled certain words.  Since then, he has begun spelling some words on his own (My favorite? “N-O, mommy!”  Yeah, loads of fun follows when he spells that one).  I took his cue and decided it was time to add some words to his picture wall.

To make room, I took down the 3 and a half year old letters (which were cute, but big) and replaced them with a set I used as a classroom teacher. 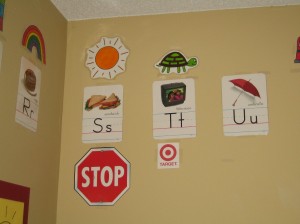 I wasn’t too concerned that the pictures in the set didn’t match the pictures posted above them.  At this point, the more picture associations, the better for learning his letter sounds. 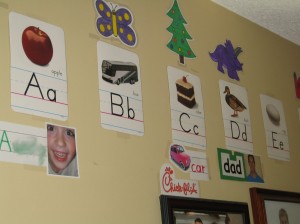 I picked several words for which he already showed knowledge in spelling: mom, dad, car, out, go, red, stop, yes, no, & family names.  For some words, I provided pictures to support his learning. 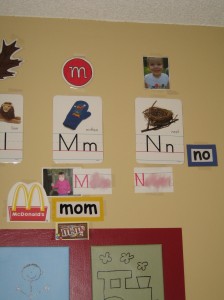 I also picked some environmental print words.  I hopped on the internet, googled the images I wanted, and printed them off.

The important part of the activity is that he helped me figure out under which letter each word should go.  Sometimes, I showed him the word (for example, Chick-fil-a) and sometimes, I had him listen to the sound at the beginning of the word (example: go).

If you’d like to see another early learner Word Wall in action, check this one out.  It’s designed for children even younger than NJoy.