You are here: Home / Rhyming Books for Kids {Our Favorites}

When teaching any skill, such as rhyming, I always like to think about books for kids that feature that particular skill and read them aloud. The rhyming books in this list have been some of my favorites to use over the years. They not only do a phenomenal job of modeling rhyming, but keep the integrity of a playful and imaginative story. 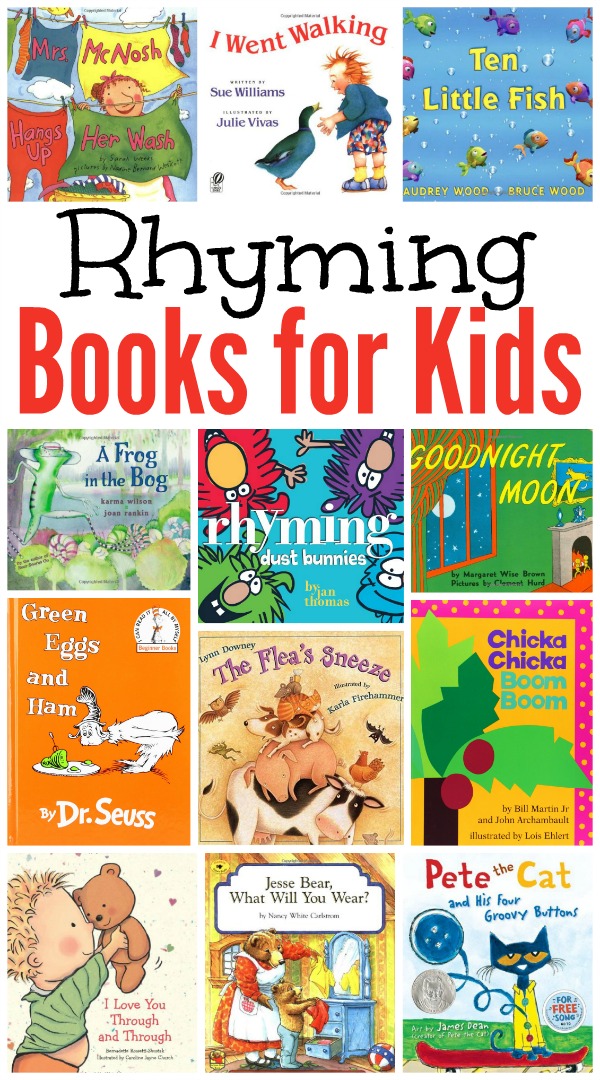 Mrs. McNosh really knows how to hang up the wash…all of it! This book always brings on a few chuckles as Mrs. McNosh begins to hang up a few odd things, like the removable teeth and the telephone. Kids will simply LOVE Mrs. McNosh Hangs up Her Wash. It’s also fun to think of other things Mrs. McNosh can hang up on the line. Watch out, it may just be you!

I Went Walking is written in a similar style and rhyme as Brown Bear, Brown Bear {another favorite rhyming book}. Besides the rhyming words, I really like how Julie Vivas included clues on the page so kids can guess which animal the child will see when the page is turned. Brilliant!

The bright colors, fun backward counting and rhyming patterns made Ten Little Fish a favorite at our house. {I think I have it memorized.} The author, Audrey Wood, is one of our favorites for sure!

There’s a Frog in the Bog on a half-sunk log…or is it? This silly rhyming book has some counting fun and a surprise ending that makes it fun to read again and again.

Rhyming Dust Bunnies was introduced to our family when we went to story time at the library a few years ago. Oh my! It was so cute, I went out and bought it that day. Kids with love Bob, the non-rhyming dust bunny…for good reason!

You simply can’t list rhyming books for kids without including Goodnight Moon, can you? Well, I suppose you could, but we’re not! A favorite of mine as a child has become a favorite of my kids as well. My 2 year old currently asks me, “Can we read ‘the balloon book’?” Although, why the balloon is missing from one page of the book, I’ll never know.

Dr. Seuss really was a brilliant writer, even though some of his books are just too long for me {and my kids}. Green Eggs and Ham is probably the one that my kids ask for the most and I don’t mind reading it…every once in a while. 😉

The Flea’s Sneeze is a silly rhyming book featuring animals in the barn. It somewhat reminiscent of The Napping House as the flea’s sneeze wakes up the other animals. It has a predictable text and after reading several times, kids can fill in the missing rhymes themselves.

It seems like any list I create for young kids includes Chicka Chicka Boom Boom. That’s because it’s a brilliantly written piece of work. It really is. If you teach young kids, it seriously needs to be in your personal library. Either that or plan on checking it out from the library frequently!

I Love You Through and Through was not only a favorite of my oldest son for MANY months, but also a favorite of mine. I think it’s important for our kids to know that we will love them no matter what. Even if they’re happy or sad, silly or mad.

Jesse Bear, What Will You Wear? follows little Jesse Bear through his day in rhyming style. The favorite rhymes of my kids is when he wears ants in his pants and juice in his hair. I like to read bedtime because that’s where Jesse Bear ends his day…with dreams in his head.

While Pete the Cat and his Four Groovy Buttons isn’t a rhyming book entirely, there is a rhyming refrain that kids love to chant, “Goodness No! Buttons come and buttons go.” This is also a fantastic book for introducing the concept of subtraction! 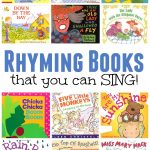 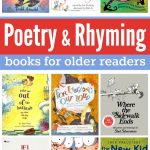 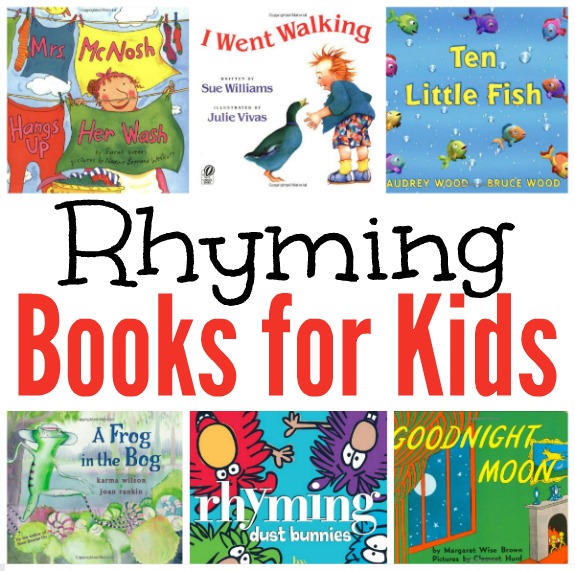