Hi I’m Cassie from 3 Dinosaurs! I’m so excited to be guest posting today for while Becky recovers from surgery.

Just over two years ago I was approached by a group of people to make some printables to be used with families in transitions. These were families that did not have a home, TV or internet. They could not go to Pinterest and look up ideas to do with their kids. You could not even be sure they had a pencil to write with. This group wanted to give something to help the families. I made some really easy to use Busy Bag printables for them.

I made some abc, number and shape printables in black and white for them to print out. The idea of the cards was that they would be used with preschool and kindergarten age kids. For each type of printable I made a set of help cards. These cards where to give the parents some ideas to do with the cards: from learning your ABCs to learning some basic words. This would give those parents something they could teach their kids. 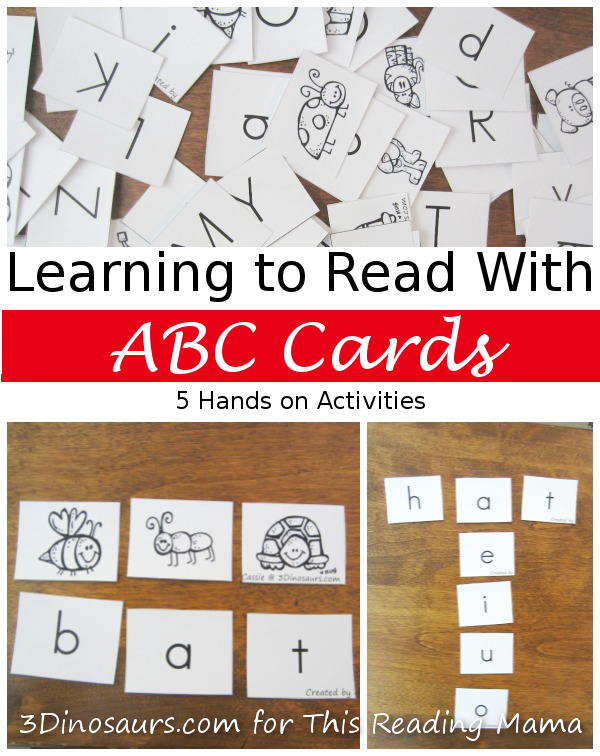 Today I thought I would show you some of the learning to read ideas that anyone can use. These activities work for kids that already know their letter sounds. All of the activities are easy to set up and work really nicely on the go. They don’t require anything but printing the cards and cutting the out. I have laminated

a set that we use often.

The 4 hands on activities are: ABC Phonics Ladders, Teaching Beginning, Middle & End Sounds, Making Rhyming Words, and Breaking the Picture Code. These activities are made for you to do with your kids.

What you need for these activities: Busy Bag Printables or set of ABC Cards that have an uppercase letter, lowercase letter and picture that matches the letters. 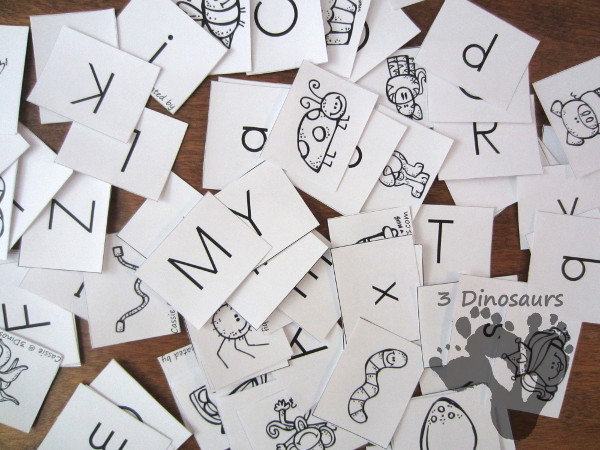 ABC Phonics Ladders
The first activity is really easy to set up. You pull out the lowercase vowels from the cards and put them in a row. I line them up in AEIOU order. Quickly review the vowel sounds one time through. Then have them pick any of the consonants to use as the beginning sound. Have them say each letter sound and then put them together. Work down the vowels with each letter. 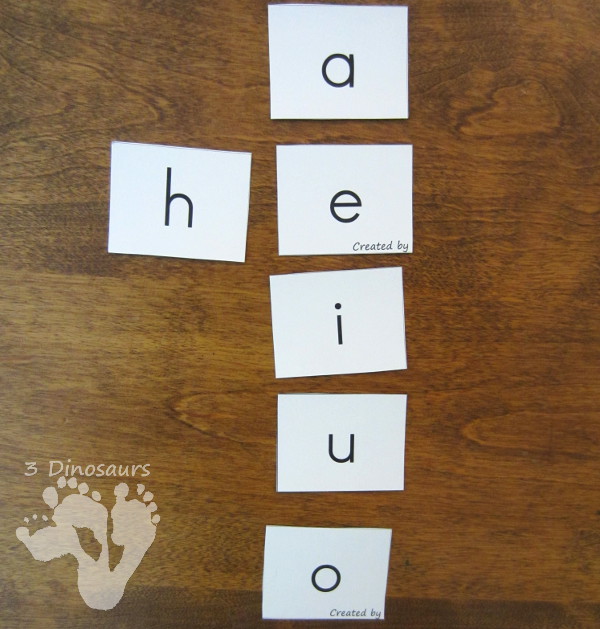 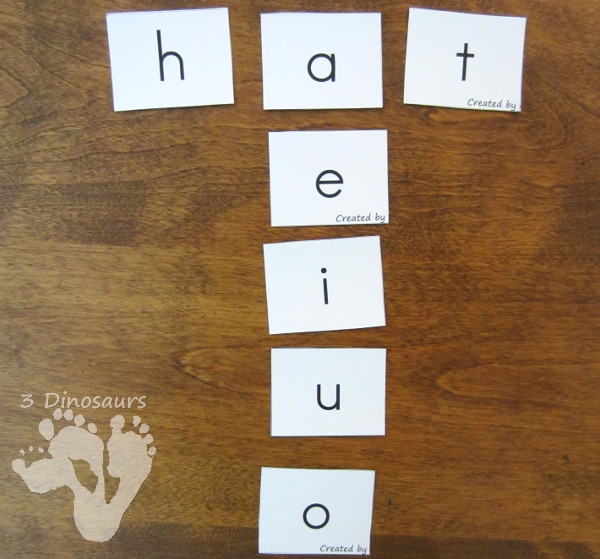 Making Rhyming Words
CVC words are some of the first words that I taught my girls. They are basis and build on the activities that were shown above. You can give them a vowel and ending consonant. You have them sound out the vowel and ending consonant together. I give them several letters to pick from to make the rhyming words. Note that I give them beginning sound letters that might not make a word. As they make the words ask if it makes of real word or not. The help cards have suggestions for some CVC word family words. 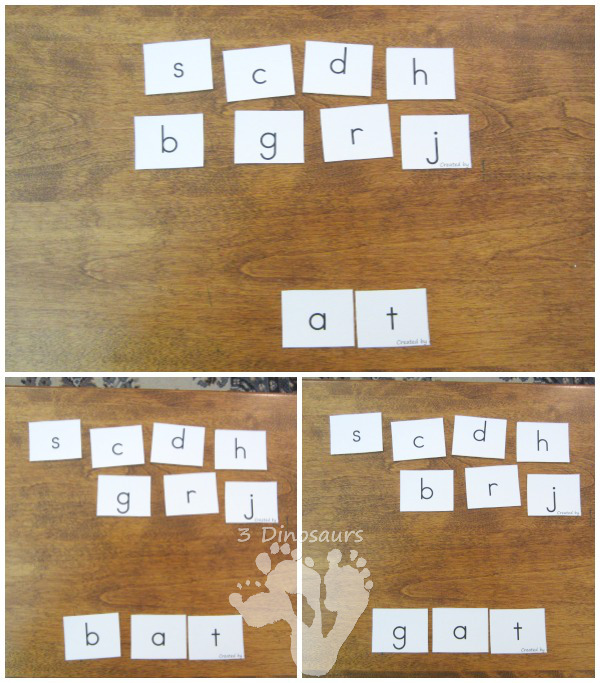 Breaking the Picture Code
As they build their skills you can make fun picture codes for them to figure out. I pull out several picture cards in advance so I can switch up the words really easy. They can sound out the beginning sound on the picture cards and find the matching letter to make the word. You could also add in sight words to have some practice with them. 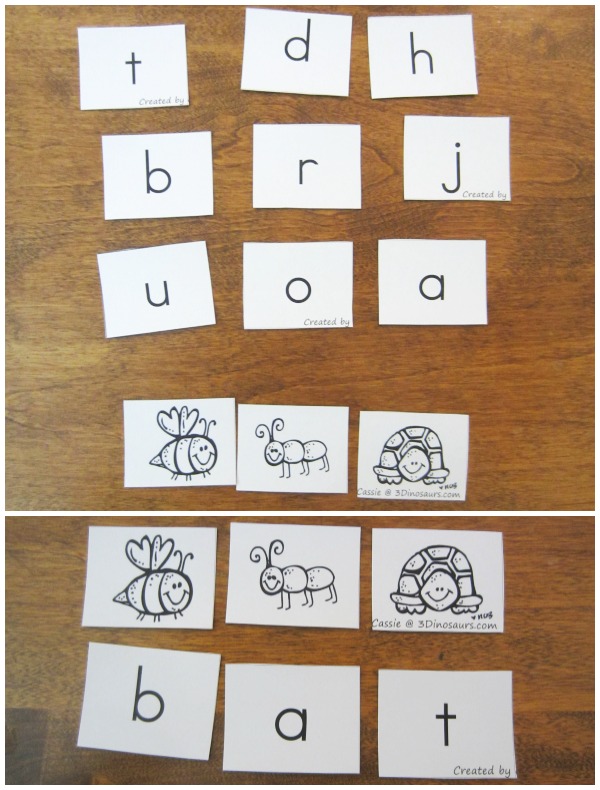 All of these are easy activities you can do with your kids. Plus the help cards have several more suggestions in them. They are easy to use. Plus check out all the ideas for the numbers and shapes as well.

You can get a copy of the Busy Bag Printables here.

These are all some really fun and easy activities to do. Check out these other learning to read activities: 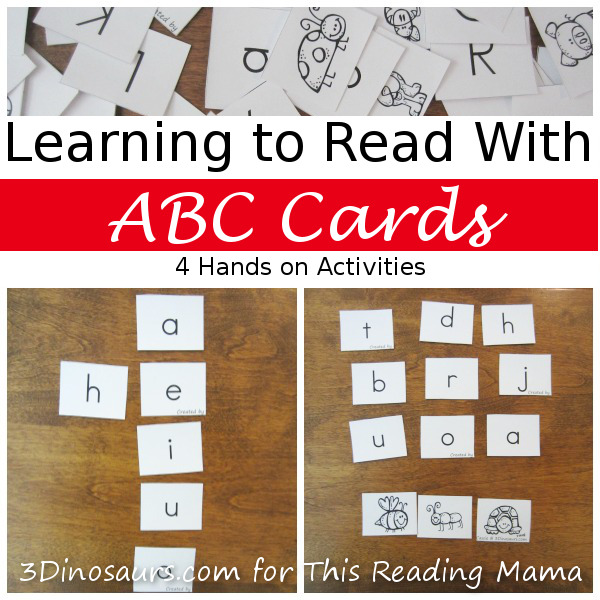