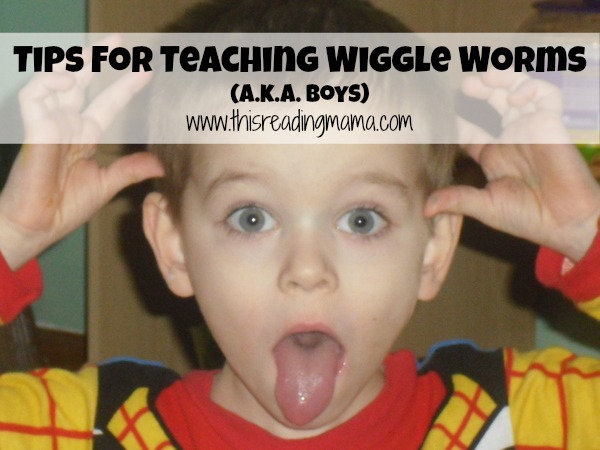 It really is amazing how different kids are.  It also goes to show you what an awesome God we have.  He is so creative that each person is uniquely made.  I sometimes forget this truth and don’t exactly embrace the wiggle worm He gave me with NJoy (especially when I’m sleep-deprived)!

I had another homeschooling mom ask me how in the world I get NJoy to do any schoolwork.  She also has a son NJoy’s age, 3.5 years, who is just as wiggly.  Now, I have BY NO MEANS arrived in this department (or any for that matter), but as I was sharing some ideas with her, it made me think that there might be another mama out there struggling with the same thing…how do you get your wiggle worm to learn?

First, let me disspell the big myth: Because my little boy won’t sit still, he has ADD.  In general, boys are busy little things.  They have this thing called Testosterone flowing through those veins and it keeps ’em moving!  A GREAT book to read about this is Bringing Up Boys by Dr. James Dobson–seriously, every mama of boys needs to read this book.  And as a disclaimer…girls can wiggle just as much!

1. What we view as play, is really work/learning for a child.

Kids naturally learn through play; and they are very good at teaching themselves in many situations.  I simply stand back sometimes and marvel as NJoy tromps through our woods, holding a “sword”.  His mind (and body) are racing as he studies each beetle and toad that comes along.  He’s learning.  It may not look like it, but he’s using all his senses to learn about this world…yes, unfortunately, he’ll use even his sense of taste!

2. Plan activities around his attention span.

If he will only sit for 5 minutes, don’t plan activities that will last longer.  (You’d think this would be obvious, but I’m guilty for making NJoy sit longer than his attention span, all the time fussing at him because he won’t sit still.)  An exception to this might be if the activity you’ve planned is something he REALLY wants to do.  People will generally stick with something longer if they’re interested.

This is related to the above tip.  I plan 4 activities (related to the letter of the week) for NJoy each day.  I ask him to sit for 2 of the 4; then I give him a break.  He can choose to go to the playroom and play, get on the computer, or I let him pick a “learning” toy…such as a puzzle, etc.  After he’s finished with his break, he completes the other 2 activities.

I’m not above saying, “You know that toy you’re always asking to play with?  You can play with it when you finish this.”

Sometimes, no matter what I say or do, NJoy just flat out refuses to do an activity.  This hurts when I’ve worked HARD to prepare it and my pride can get in the way.  But I’m learning that I need to just stop and let him be.  The world won’t stop revolving if he doesn’t do my activity right then and there…although sometimes I act like it does!

Boys need to MOVE!  Is it rainy?  Put on the radio or a CD and go for it!  Put in your exercise DVD and let him exercise with you!  Incorporate movement into your schoolwork.  I LOVE this idea.  As great as this sounds, I am also guilty of not letting NJoy move enough.

My sister has a little boy who didn’t enjoy sitting and learning as a young child.  So she had to sneak it in.  She incorporated the outdoors, his favorite toys, even his favorite cereal to “secretly” teach him.  Based on some of the things I learned from her, I wrote a post about this on I Can Teach My Child.

Do you have any tips that you use with your wiggle worm?  I’d LOVE to hear them!