This past week, NJoy took a retreat from his usual “letter of the week” and just focused on Thanksgiving.  The theme was integrated into some of ALuv’s schoolwork, too.  (If you missed these recent Thanksgiving posts, they were Thanksgiving tangrams, Colonial Day learning, Thanksgiving Do-a-Dot Mosaics, and A Poem of Thanksgiving.)

It wasn’t the heaviest week of schoolwork for NJoy.  He still shows great interest in learning, but has just recently begun to say, “I’m done” after 2 activities.  And I’m fine with that.  Sometimes, I’ll sneak an activity in after dinner or after rest time.  BUT this week was a little lighter than usual because (drumroll, please) HE DECIDED TO GET ON THE POTTY (@ 3 years, 1 month old)!  So, we’ve spent a lot of time in the bathroom instead of the schoolroom.  On this week up to Thanksgiving, I am thankful to have less diapers to change!! 🙂

Here are the Thanksgiving Activities we did:

Most of my activities for NJoy came from Carisa’s Thanksgiving Pack at 1+1+1=1 & 2 Teaching Mommies: Turkey Unit & Thanksgiving Unit, but I did get a few other activities elsewhere.  I’ll link to those in my post.

We did some stamping, 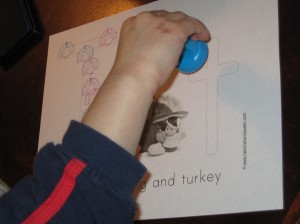 T for Thanksgiving and Turkey 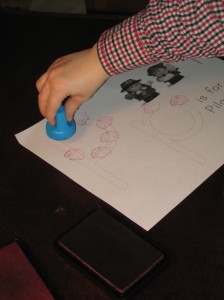 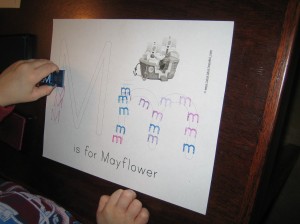 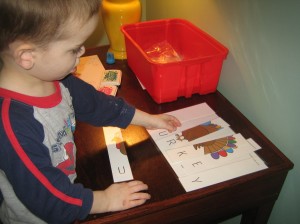 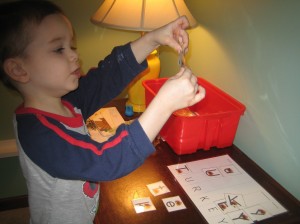 Then, I took the letters from turkey (made by Carisa) and had him match them on the same mat. 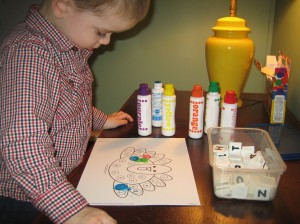 This was his favorite activity of the week by far.  I used the lower case Comic Sans font turkey from Making Learning Fun.  He picked an upper case letter tile, found the matching lower case letter on the turkey, then placed a dot on it.  He asked for this one over and over again! 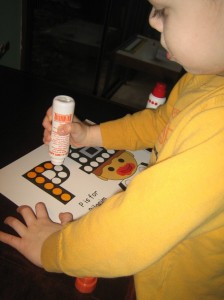 P is for Pilgrim from Making Learning Fun (Apparently, this pilgrim had red lipstick on, according to NJoy.  Hence, the red do-a-dot paint all over his mouth.) 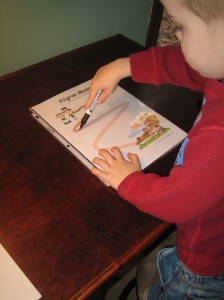 Pre-writing from 2 Teaching Mommies and 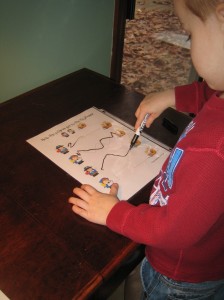 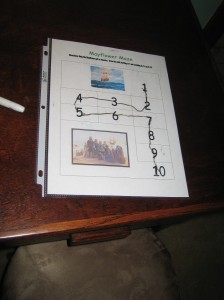 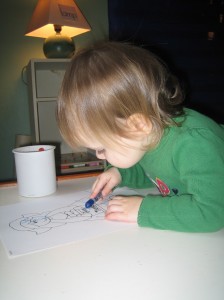 Of course, MBug had to color.  So I printed off a pilgrim girl from DLTK.  I LOVE to watch her color.  She’s so into it! 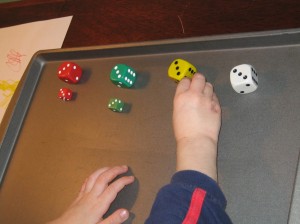 After he said, “I’m done” one day, he wanted to play with the dice. So I had him match numbers and colors.  Here he is matching the “baby dice” to the “mommy dice.” 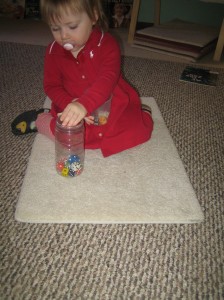 MBug enjoyed playing with the dice as well.  She is so funny recently.  She will go over, pull out a mat and place it on the carpet, then ask for me to pull something out for her; beyond what’s already on her shelf. 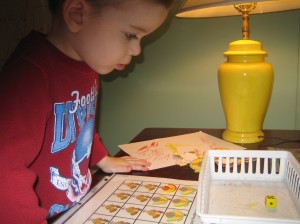 Since he was really into dice this week, I downloaded a Turkey Grid Game from PreKinders in which you roll the dice, count the number, 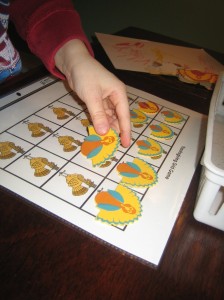 then place that many of an object (we used foam Turkey stickers that I got on sale @ a local craft store) on the grid until you reach 20.

He really enjoyed the foam turkey stickers, so I drew up a math lift-the-flap activity up for him in which he had to ID the number and place that many stickers underneath.  I was impressed that he was able to peel the turkeys himself and… 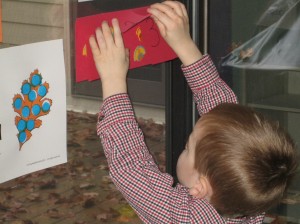 that he wanted it hung up so he could look at it and count the stickers. 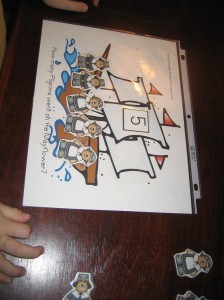 How Many Pilgrims on the Mayflower? from Musings of Me (I can’t for the life of me find the specific link to this, so this link is a generic link to her site.  If you’re able to find it, let me know!) 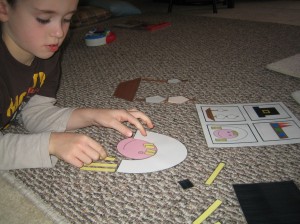 I found this Thanksgiving shape activity last year from Musings of Me and pulled it out for ALuv since we started working on shapes.  It was perfect to integrate into our math and he greatly enjoyed doing it. 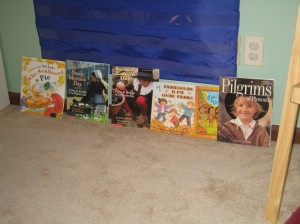 These are the Thanksgiving books I pulled down from the attic to use this last week: There Was an Old Woman Who Swallowed a Pie, Sarah Morton’s Day, Samuel Eaton’s Day, Thanksgiving is for Giving Thanks, One Little, Two, Little Three Little Pilgrims & Pilgrims of Plymouth.

« A Poem of Thanksgiving
V is for Vehicles »