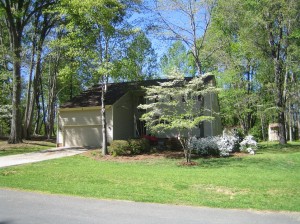 Last week, we began a study of plants.  We live on a very wooded lot, so I thought studying trees would be the best place to start; since ALuv has had so much experience with them.  I think all my kids would just live in our woods if I let them, especially NJoy!

I wanted to share one activity that ALuv THOROUGHLY enjoyed from our study.  He sometimes struggles with whining through activities, but this one greatly piqued his interest…not one ounce of whining.

The idea came from an old book I read aloud to him called Our Very Own Tree by Lawrence F. Lowery.  This is a delightful book about two girls who “adopt” an oak tree in a nearby park.  They record all their observations about the tree throughout the year.

I thought it would be fitting to have ALuv “adopt” one of our trees, record his observations, and use the internet to figure out what kind of tree it was.  He quickly took the lead and added his own flare. 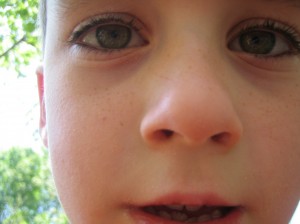 and a few other shots, too!  I guess this is what happens when you set a boy free with a camera! 🙂 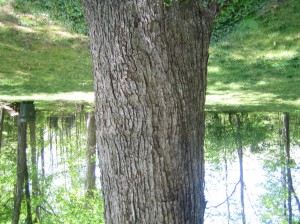 He said, “I took this picture while I was upside down.”

We downloaded the pictures onto the computer and then did some research to figure out what kind of tree it was.  He picked his favorite pictures of the tree to print out.  We looked at the pictures we’d printed and he decided to use a file folder and make a tree riddle “lap book” of sorts.  He  wouldn’t let me look at it until he was finished. 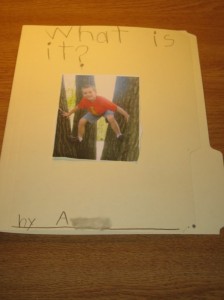 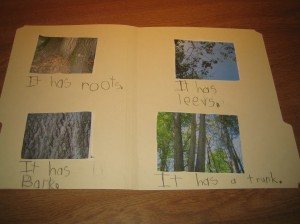 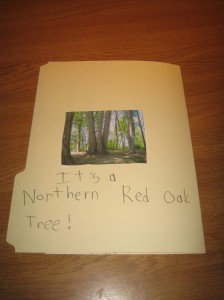 Simple AND a sneaky way to get in some technology, outside time, spelling, handwriting, logic, and science.  Yay! for covering multiple objectives.