When NJoy asked me this question a few weeks ago while we were reading a book, I realized this boy didn’t even know what the beach was!  He was only 9 months old the last time we took a trip and he spent more time inside sleeping than he did at the shore.  I knew right then and there that it was due time to plan a trip.  And we had a blast!

ALuv took to the water and sand immediately, jumping waves and building structures.  He’d only been asking me since the beginning of summer when we were going to go.

MBug was enamored with the sand.  She had it everywhere!  She would have bathed in it if I had let her. 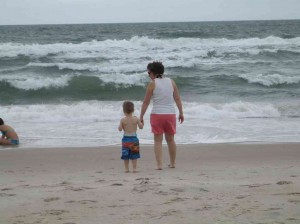 But, NJoy wasn’t so sure of the water at first.  The crashing waves, the moving water, the wind in his face, and the loud roar was a little much for him. 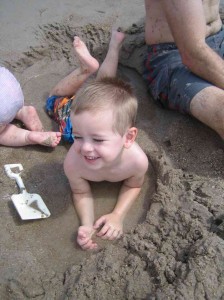 But he warmed up to it by the second day.

It was rather fascinating to see the beach through his eyes.  He was extremely interested in the seagulls, the seashells, and how the water washed up on shore…all new concepts for him.

This trip to the beach reminded me of an important part of comprehension.  It is very hard for a child to comprehend something if it is not made real or tangible for him in some way.  Sometimes, it’s a simple as building the child’s background knowledge by talking about the subject and at other times you get to excuse yourself to the beach or the mountains.  But it is hard to comprehend a subject when you just don’t have the background knowledge with which to attach meaning.

I plan on reading that same book to NJoy tonight.  And because he’s had the hands-on experience of stepping in that ocean, digging in the sand, and looking for seashells, he’ll understand the text much better.  And this time, he won’t be asking “What is the beach?” but “When can we go back to the beach?”

For other ideas on making it tangible, check this out.

Thanks for joining This Reading Mama on a literacy journey.