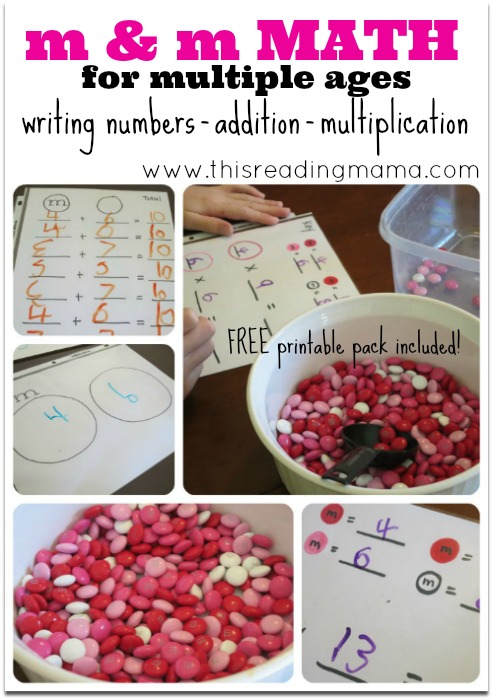 Teaching multiple ages at the same time is not an easy task. There are days when I just want to throw in the towel. Seriously. {It’s only by God’s power that I don’t.} But then, there are those moments that everything just “clicks” and I just have to smile. Our most recent m & m math activity was “that” moment. I was amazed at how a tiny little candy made math for multiple ages possible. So much so, that we did it for 2 days in a row, with lots of begging for 3 days.

I had bought some Valentine m&m candies in hopes that we could integrate them into our schoolwork somehow. So, we used our recent candy purchase to make math fun for everyone. {I hand drew all of these activities, but at the end of this post, you’ll find a printable pack I created that you can download and use with your own kids. Also feel free to draw your own.}

I gave my daughter (3.5 years old) 10 pieces of m & m candy. She shook them around in her two clamped hands, and then released them into an empty container. I showed her how one side had an m and the other did not. I asked her to count her m&m candies that had an m on the top. 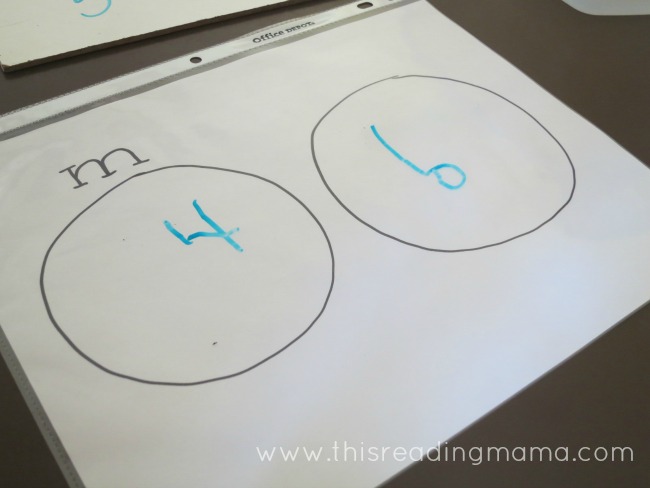 She then wrote the number she counted (4) on her mat. She did the same with the m&m candies that had the m facing down. What you can’t see in this picture is that I had written out numbers 1-10 on a dry erase board and she was looking at them and imitating the number on her own mat. She was so proud of herself as she is just learning to do this. After she’d written her numbers, I praised her number writing, then said, “Oh, and guess what? 4 plus 6 equals 10. Wow!”

At the same time, my 5 year old son was using 10 m & m candies to practice adding. He counted, wrote the number of candies with m’s facing up and m’s facing down to create a number sentence. {This activity is particularly good for addition because it demonstrates how we can make 10 in more than one way.} 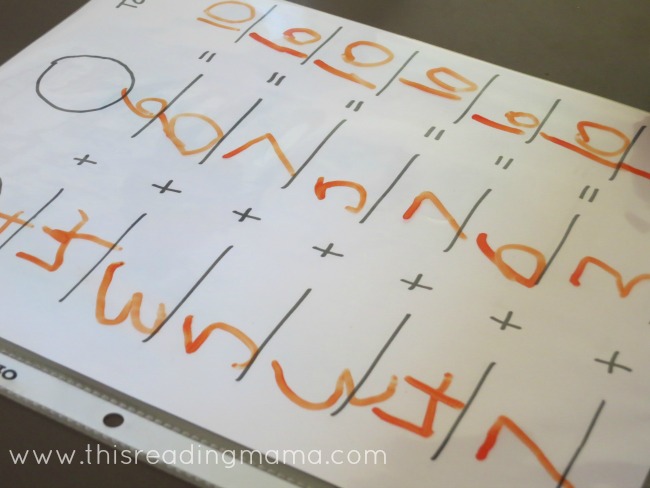 When he reached the end, we had a great discussion as to why the number always equaled 10. Then, of course, he got to eat him m & m candies {his favorite part, I think}.

My 8 year old used m & m candies to work on multiplication. Because there are only 4 colors in the Valentine pack, I wrote a key at the top of his paper. 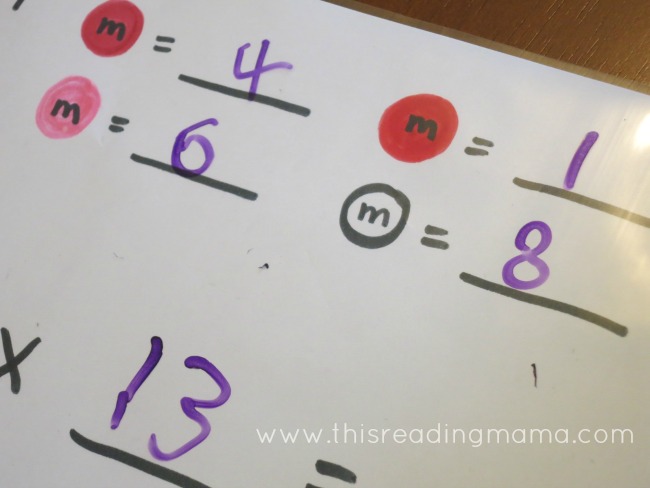 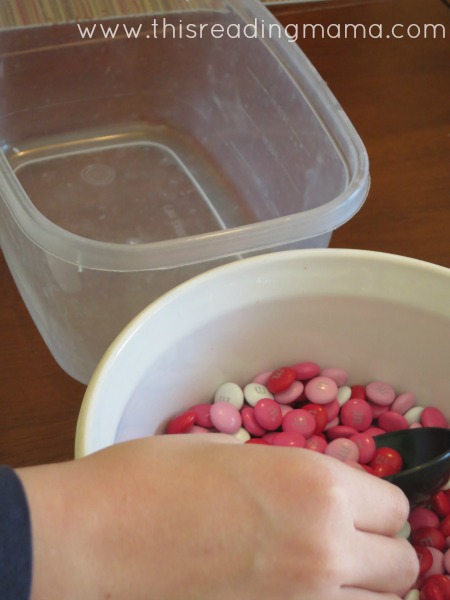 Then, he scooped out some m&m candy into an empty container and counted up how many he had of each color. 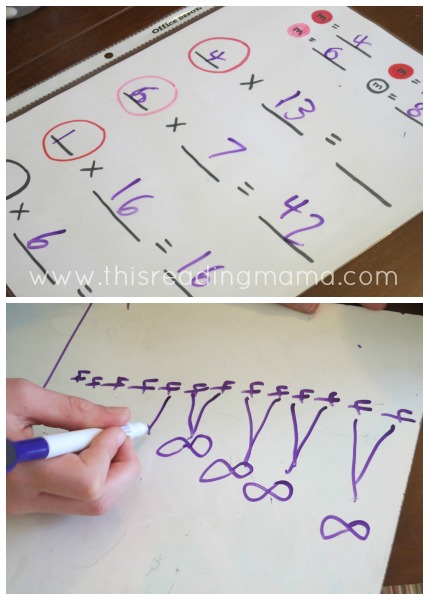 He used the numeral he had assigned to each color and multiplied that by the number of m & m candies he scooped of that color. He is just learning how multiplication works, so he chose to use his foundation of addition to help him solve his problems. It was interesting to me how he added 4 thirteen times to get the product. After he had finished, I showed him how he could have also solved the problem by adding 13 four times. He laughed at his long way of doing it. 🙂

If you are in the classroom setting, I understand that m & m candy may not be an option for you with allergies and such. The same objectives can most certainly be obtained with coins. 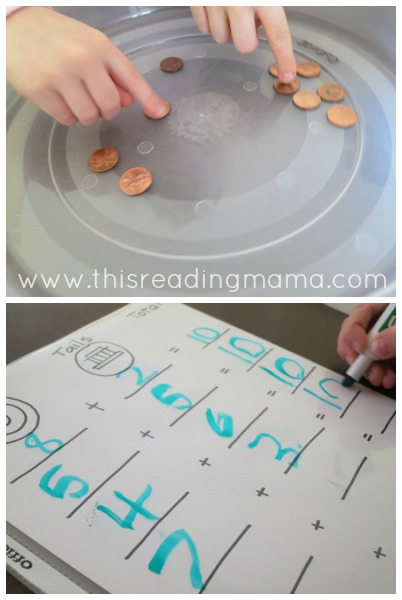 As a matter of fact, that’s what we used before I bought the candy. We used heads vs. tails. Those who want to work on multiplication can assign a number to four different kinds of coins (or even colored beads). The possibilities are endless! 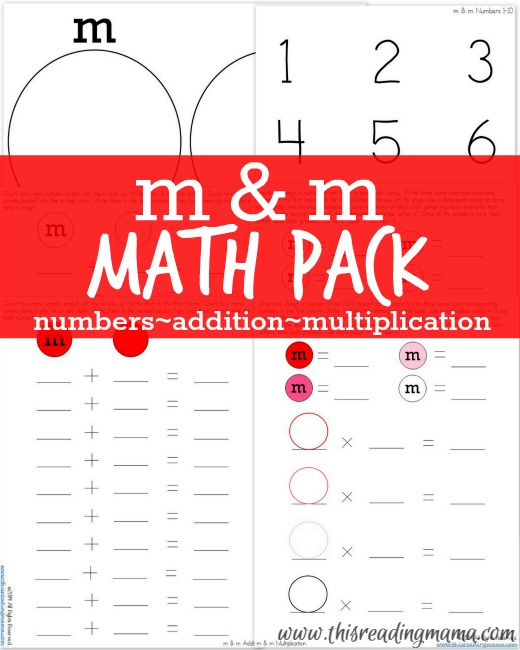