We are still plodding away at our 12 Days of Christmas fun.  We moved on to J is for Jesus.  If you missed the Christmas activities for the letter C, you can click here and here.

ALuv knows the Christmas story, but it’s still new to NJoy.  So, the first thing we did was read Christmas Angels.  Although it does not include the story of the wise men, I added that in.  Just a side note: if you look at the story in Matthew, you will note that the wise men did not come to the stable, but to a house. 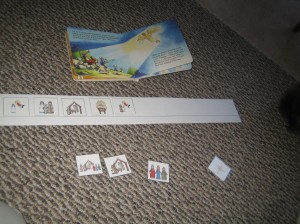 As we read the book, we put the nativity story pictures in order, thanks to 2 Teaching Mommies!

Two more favorites that tell the Christmas story that we read were: The Crippled Lamb and ‘Twas the Night Before Jesus (I think this one is out of print; a library may have it).

We also read Mary Had a Little Lamb, a Christian Nursery Rhyme that I wrote and illustrated.  You can download all my rhymes for FREE here. 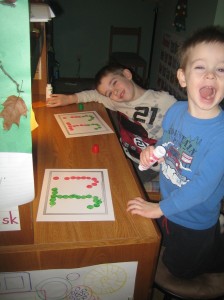 Upper and lower case J with Christmas colors (I tried to encourage them to do the red and green in a pattern, but both boys did their own thing.) 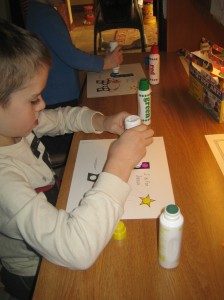 J is for Jesus do-a-dot 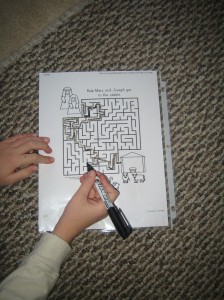 I set ALuv free to do this fun maze (which he did several times in a row after complaining for about 5 minutes that it was just too hard…the poor thing), 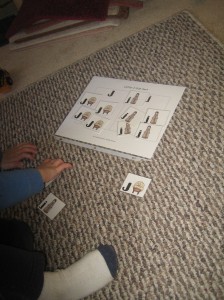 while NJoy sorted upper and lower case J’s and 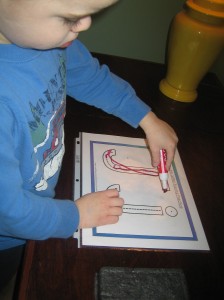 practiced tracing the letter J.  He really liked the part where he got to pick up his dry erase marker and dot the lower case J. 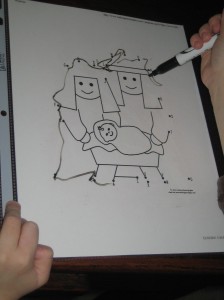 I originally printed this one out for ALuv to do, but was totally surprised to hear NJoy singing his ABC’s and doing this one by himself! 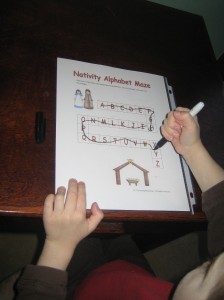 He also did this ABC maze. 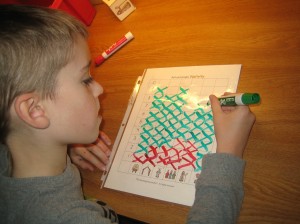 Roll & Graph Nativity: only ALuv did this one.  He didn’t want to stop! 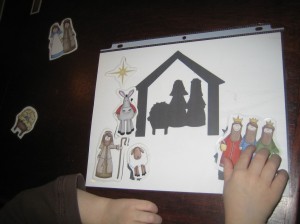 Nativity Shadow Matching: NJoy did this while ALuv was busy rolling and graphing. 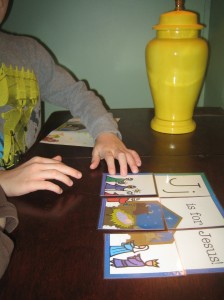 J is for Jesus Puzzle…ALuv working with NJoy, as NJoy shouts, “I can do it myself!  Don’t help me!” 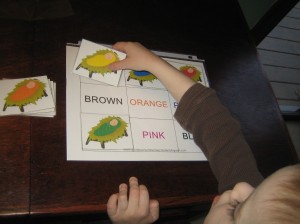 I used the original for NJoy, 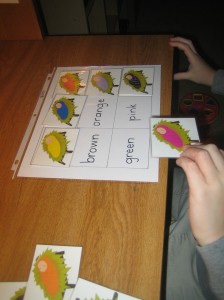 but changed it up a bit for ALuv, just writing the color words in black, so he had to actually read the words.

For some reason, all three children decided on this particular day that they did not want to color the J is for Jesus page. 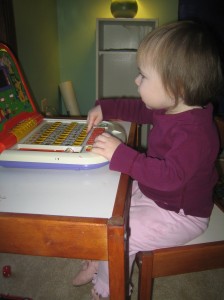 MBug was too busy playing with the laptop in her rotated toys for the week.  By the way, do you like her new haircut? I  was tired of the “baby mullet” and cut it into a bob.  I tried to stack it in the back, but her hair’s still a little too fine for that. 🙂  ALuv (who usually loves to color) said he didn’t want to.  So, I pulled out the water colors.  And the crowd went wild! 🙂 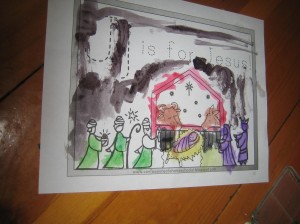 We moved into the kitchen and I let the boys paint away.  I was surprised at how well ALuv was able to paint in the lines and how much detail he put into it.  They spent quite some time working on it.  So much so, that NJoy’s picture had a hole in the middle of it from all his hard work!

I found this simple stable ornament.  The theme was apparently water color painting because as soon as I said we were going to color these, both boys begged to paint again.  So paint they did.  We added star stickers to the top and hung them on our Christmas tree.  I thought they turned out quite nicely. 🙂 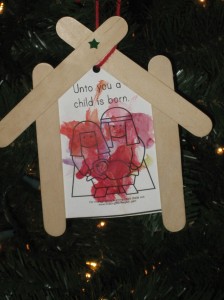 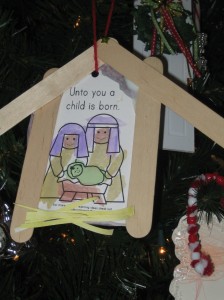 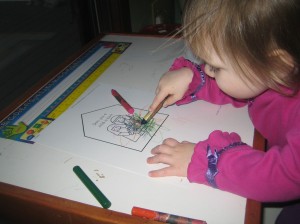 MBug didn’t paint, but she sure did color hers! 🙂

NJoy is doing pretty well with all these activities.  I’ve found that I need to give him a break after about 2 or 3 activities.  Otherwise, he begins to shut down.  I give him the option of getting out a toy or teaching tray from MBug’s selection for the week. 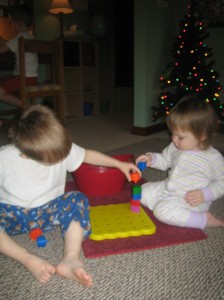 Here is one such moment caught on camera…although a bit blurry.  I love that I got a shot of the two of them in their jammies helping one another stack the pegs.

Stay tuned for Part 2 of J is for Jesus.  Merry Christmas!