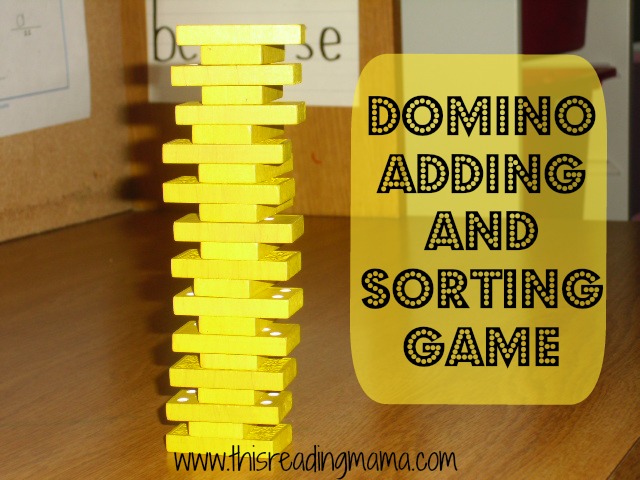 If you’ve been following a few of my posts lately, you’ve seen ALuv’s newest craze: dominoes!  The boy LOVES to build towers and all kinds of structures.  It simply blows my mind.  While he and I are very similar in some ways, he TOTALLY takes after his daddy when it comes to that engineering mind.

We have just finished up a unit on fact families (I made two printables for this unit: Fact Family Triangle & Domino Fact Families), and I was trying to think of one more way to review our addition facts using his beloved dominoes. And this Domino Adding Sorting Game was born.  When I explained how to play, a huge smile broke out. And it’s oh, so simple (to play and modify for the classroom)!

To prep, I took index cards and wrote out the individual number words from zero through twelve (I could have used numerals, but I wanted to integrate some reading). 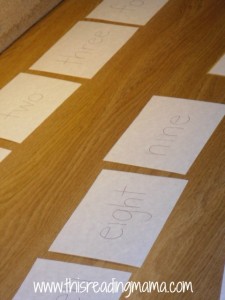 He read each word and put them in order from least to greatest. 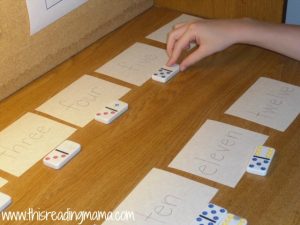 He emptied out all his dominoes, added up the sums (from the dots of both sides), and sorted them under each sum. 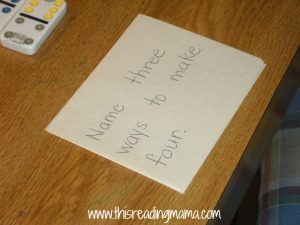 After all the dominoes were sorted, I pulled out these question cards I’d written up (integrating more reading) and he had to answer them.  This was also a way to help him review fact families.

The cards included these (feel free to create your own):

And that’s it- a Domino Adding and Sorting Game!  {Okay, so I have to admit- this is really not a “game”, but you can disguise almost anything as a game, with most kids, if you present it as such.}

I shared this idea at This ‘n That Thursday!