To prepare for our rain/rainbow unit, I went through all the books on the boys’ shelf in their bedroom and found It Looked Like Spilt Milk.  I honestly had forgotten all about this book!  After I read it aloud, this very simple craft/writing activity popped into my head for the boys to do:

After reading, we brainstormed some things that clouds could look like.  Then each boy picked one thing for their cloud to be. 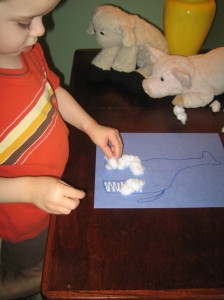 NJoy picked a giraffe and I drew a giraffe outline on the blue construction paper.  He then glued cotton balls down. 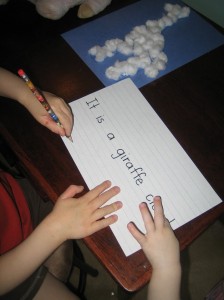 After he was done, I had him tell me about his cloud.  I wrote his sentence on the blank writing paper, asking for his help with letters to write by saying the letter sounds very slowly like this:  “I-/t/ /t/ /t/…hmm, what letter makes that sound? /t/”.  He then attempted to write his own name at the bottom.  He’s now showing interest in writing his letters…time to start working on it!!

ALuv picked a car to draw. (If I must be completely honest, he first wanted to draw a lizard, but couldn’t do it himself.  After demanding that I do his work and a bad attitude that followed, he was asked to be excused from the schoolroom for a bit.  When he returned, he chose to draw a car instead.   How’s that for keeping it real?!?)  After gluing down his cotton balls, he used the pattern from the text to write out his sentences.  “Sometimes it looked like a car.  But it wasn’t a car.”

The example above demonstrates why I love writing so much-it’s already differentiated without much planning…meaning you don’t have to spend a lot of time figuring out how to adapt it for the different abilities of children.  Each child simply does what he can and we encourage and support his learning.  Very cool!

If you haven’t already joined me by subscribing by RSS Feed, Facebook, Twitter, or email, I would love to have you join This Reading Mama. Thanks and God bless!