Helping kids hear beginning sounds is one of the first ways we can help kids apply their phonics knowledge to real words. Typically, kids can hear and isolate the first sound. Sometimes, even the last sound in words can come first.

This is seen especially if children are given free reign to spell words on their own at a young age. Playing with beginning sounds (and/or ending sounds) through listening games that feature pictures instead of words or letters (also known as phonemic awareness) is a fantastic way to strengthen a child’s ear for sounds in words. 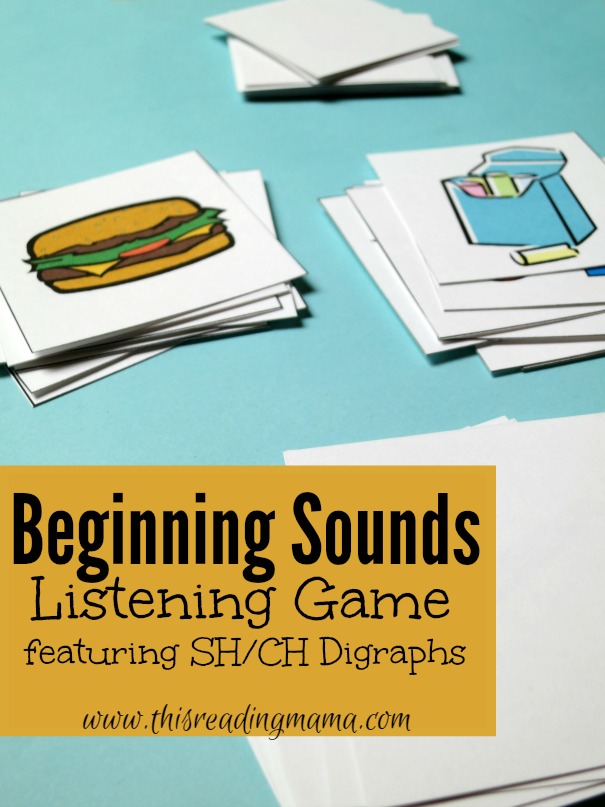 As NJoy has entered Kindergarten, we have ventured on to blends and digraphs instead of single letter beginning sounds. A couple of weeks ago, I posted a SH Digraph game we called, “Shhh! Don’t Wake the Baby” and today, I’m going to share another game we played that features the SH and CH digraphs.

To Prep the Game:

To Play the Game:

1. Both players place their cards in a pile face-down. At the same time, players turn over their top card from their pile. They quickly say the name of the object on the card and place that card in a discard pile in the center of the play area, 1 discard pile for each player. If the beginning sounds on the cards do not match (for example, cone and cheer), players continue drawing cards, calling out the name of the pictured object and placing it in their discard piles.

2. If the players draw cards at the same time that have the same beginning sound (such as cheese and chips),

3. the first player to slap the cards and say, “Check it!” after the cards are laid down, gets to keep all the cards in both piles.

4. Play continues in this manner until all the cards are gone. The player with the most cards in the end wins.

You’d think I would have won the game, seeing that I’m the adult and I’m playing my Kindergartner. But he was MUCH faster than me and actually beat me by a long shot each time we played! {Can I blame it on the toddler in the room who was distracting me?}

Download the C and CH Picture Cards for Check It! HERE.

« Go on a Word Search after Reading {and Giveaway!}
Word Family Blackout »