Okay, so what do you do if your child knows his letters and most letter sounds?  Word families!

A Word Family is a set of words that have the same ending chunk in them like the at family: cat, sat, rat, fat, etc.  Keep it simple at first and only add one letter to the front of –at, so words like flat and that would not be introduced quite yet.

ALuv and I started with a sort from the Words Their Way supplement book (Sorts for Letter-Name Alphabetic Spellers).  I love these sorts because they have the child match the -at words and -at pictures.  Carl’s Corner (takes a while to download) also has some words and pictures that you can match, but I like the WTW ones better because they are more appropriate for the beginner.

Here is ALuv sorting his words and pictures by himself. 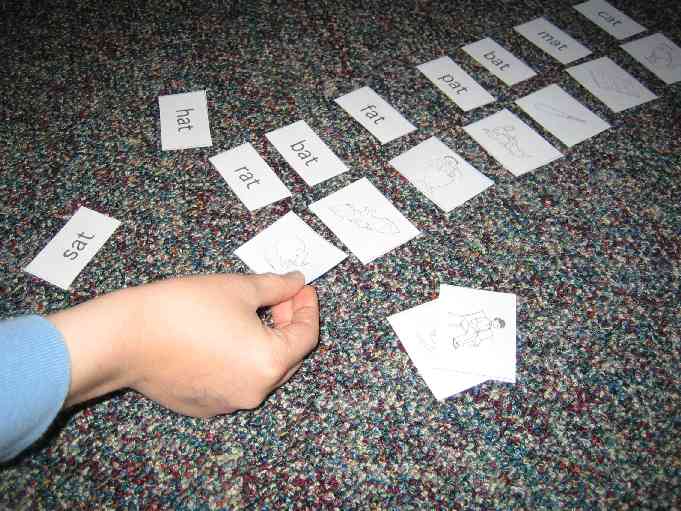 How exactly did I introduce these words?

I went through the pictures and identified what was on each picture.  We clarified the vocabulary.  We also talked about how all these words were rhyming words.

I picked up the word card cat and pointed to the first letter.  “Hmm…this is the letter c and it makes the /k/ sound.  Can you find a picture on the floor of something that starts with the /k/ sound?” (cat).  I did this with several of the words.  We focused mainly on the initial sound and didn’t really talk too much about the -at part on the first day.

After I had matched all the pictures, we read all the words and made a big deal about the beginning sounds.  Cat sounded more like /k/ /k/ /kat/.

2. He matched the cards with my support.

I shuffled the word and picture cards and let him match them with support.  When he matched them correctly, I would ask, “How did you know that was the right word?”  Asking him this question helped him to verbalize his strategy.  If he mismatched one, I encouraged him to 1) identify the picture, 2) tell me the picture’s initial sound, and 3) look at the word card and see if the initial sounds matched up.

Follow your child’s lead.  ALuv wanted to do it again, so I reshuffled and he did it again.  But after that, he was done for the day.  This activity took us about 15 minutes.