NJoy is currently 2 years, 8 months.  And this little boy NJOYS learning.  He is actually borderline obsessive! 🙂  He has walked into our new schoolroom several times since its construction and demanded, “I want to ‘do school’!” (It really sounds more like “do cool”; since he can’t say his s blends very well). 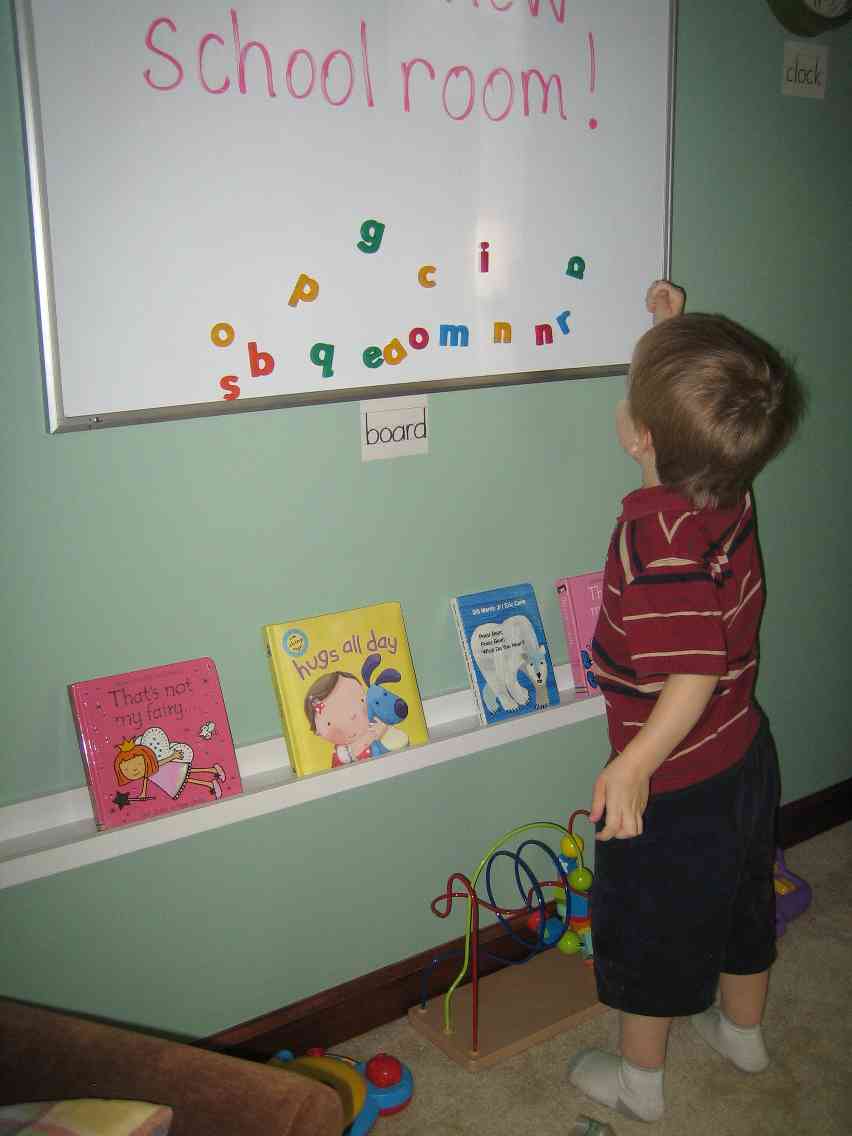 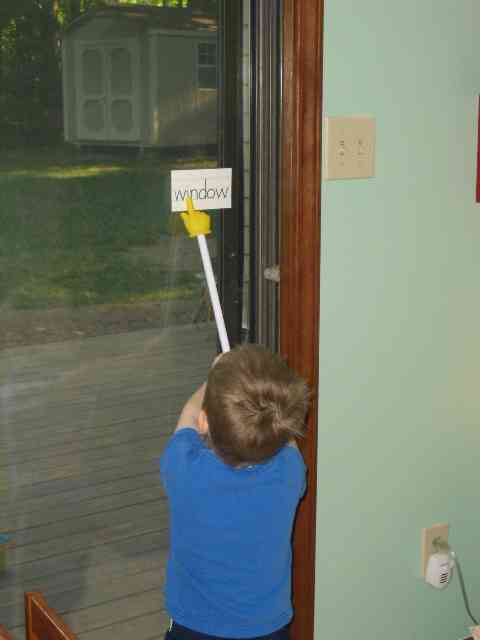 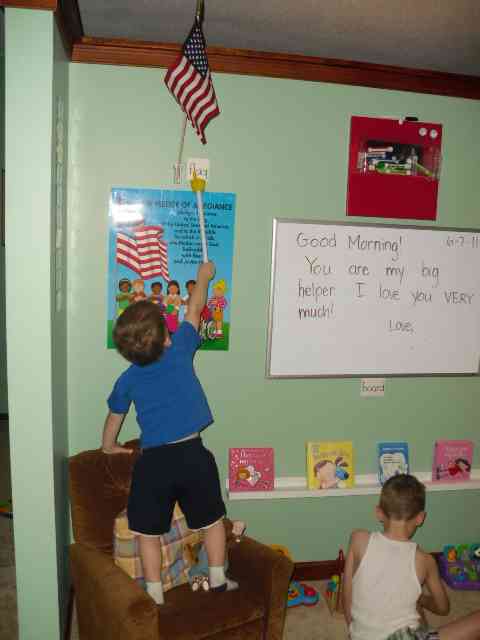 “Mommy, I need the pointer so I can point to letters.” – I hear this at least twice a day. 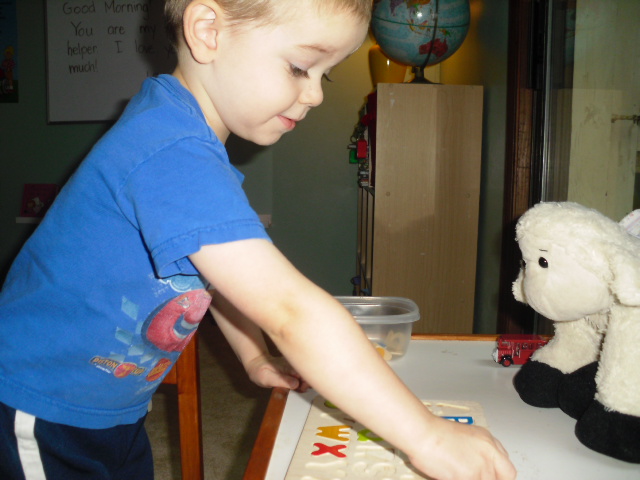 Sneaking in a quick ABC puzzle with Mr. Lamb before breakfast

Now that he’s taken to it, I’ve realized that I need to be more intentional with him.  While I sometimes still adapt things for him that I do with ALuv, I’ve begun separate lesson plans for him.  The awesome thing is that I’ve got PLENTY of amazing online resources to help me out.  You can visit the other sites and their amazing resources by clicking on the links with each activity.

Instead of going through the alphabet in order, I introduce letters and their sounds in more of a developmental order (I am planning to post more specifically about this soon).   Sometimes, I’ll start with the letter of the child’s name, but since we are studying butterflies, I decided to go with B. 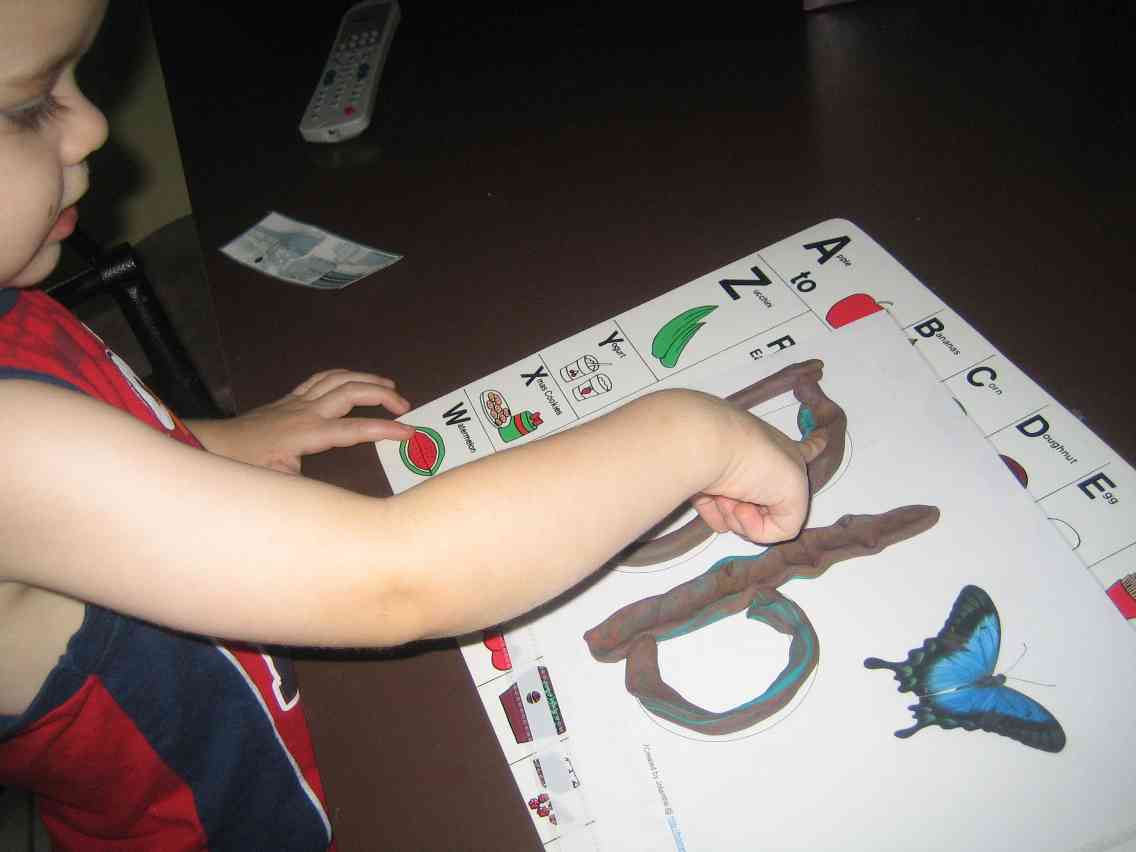 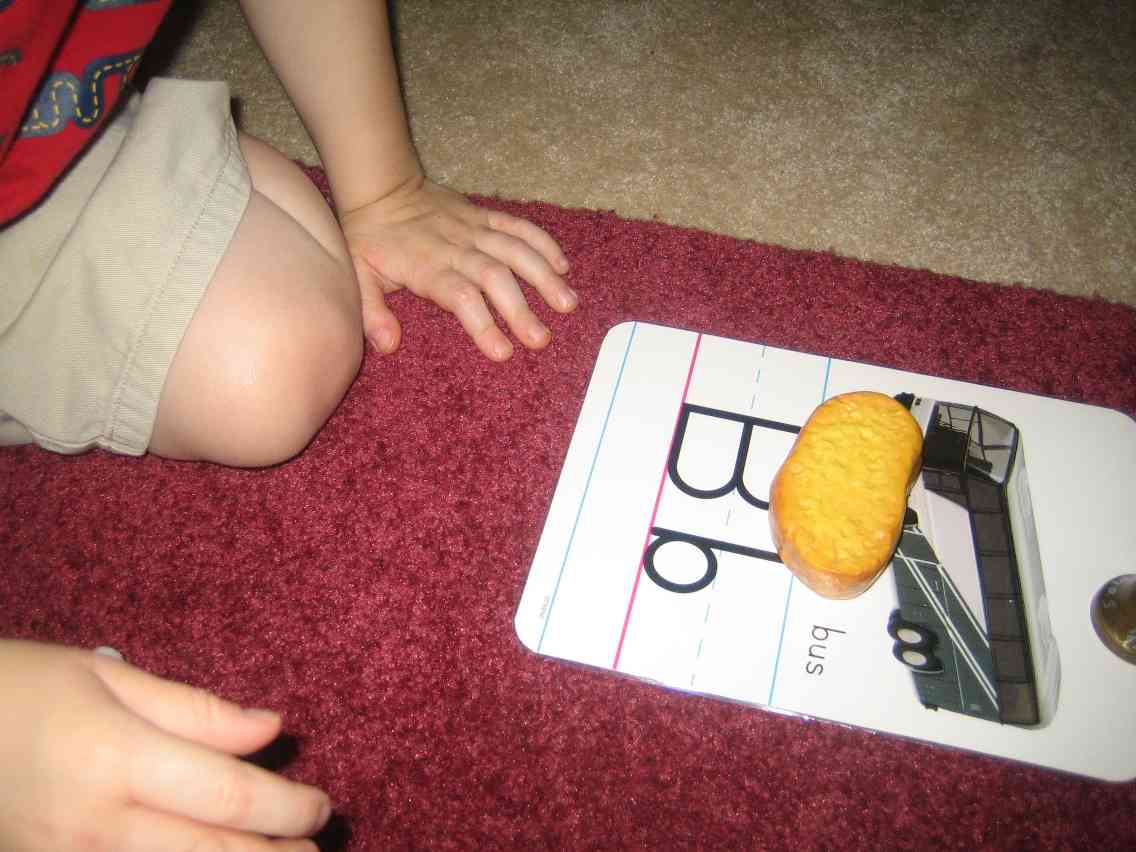 For each object, I placed it on this Bb mat, saying the object’s name like this: /b/-/b/-bread.  For more ideas on using sound tubs, click here and here. 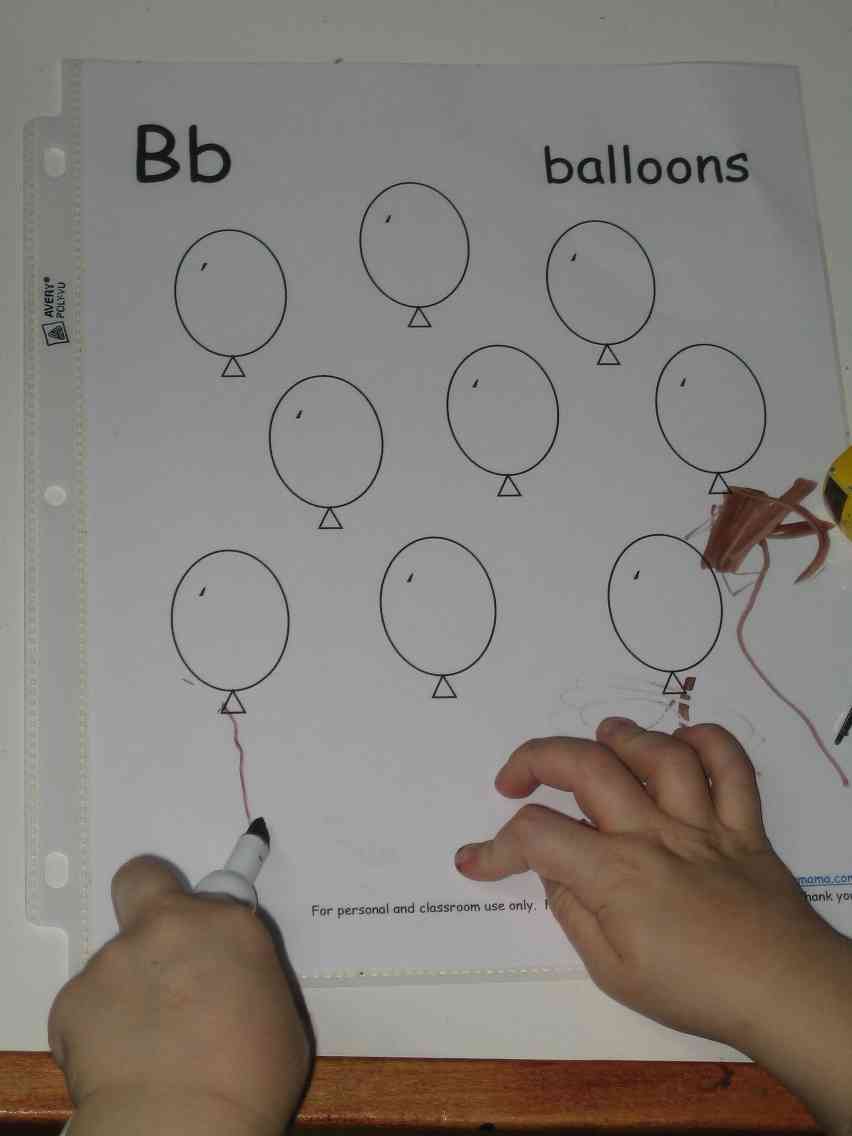 If splashing in mud puddles is NJoy’s 1st love, drawing strings on balloons has got to be a close 2nd.   So much so, that I have to be careful not to leave writing utensils within his reach because if he sees an o anywhere in the house, he writes a line coming from it and proudly exclaims, “Look mommy!  I made a balloon!”  Since we are studying the letter B, I created this page for him and put it in a sleeve protector so he could erase and draw again and again (and again!).  He requests to do this one several times a day.  You can download it here if you think your little one(s) may enjoy. 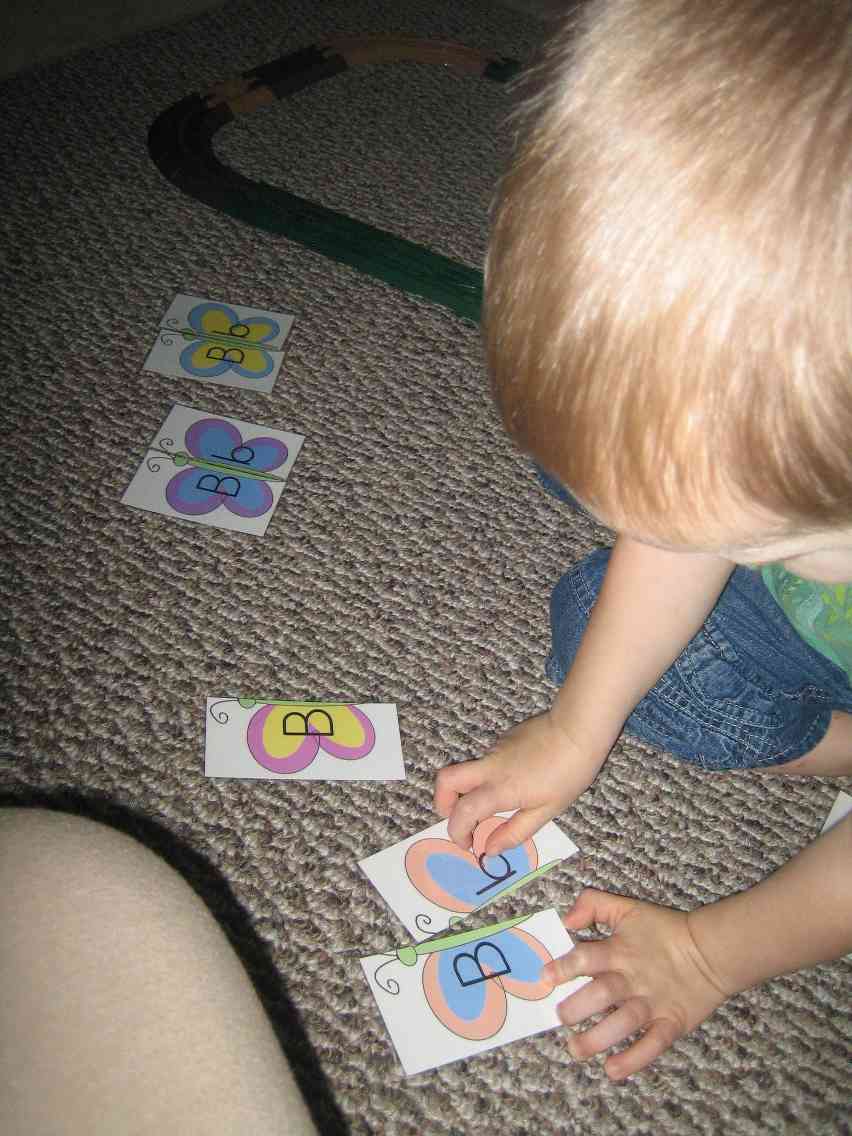 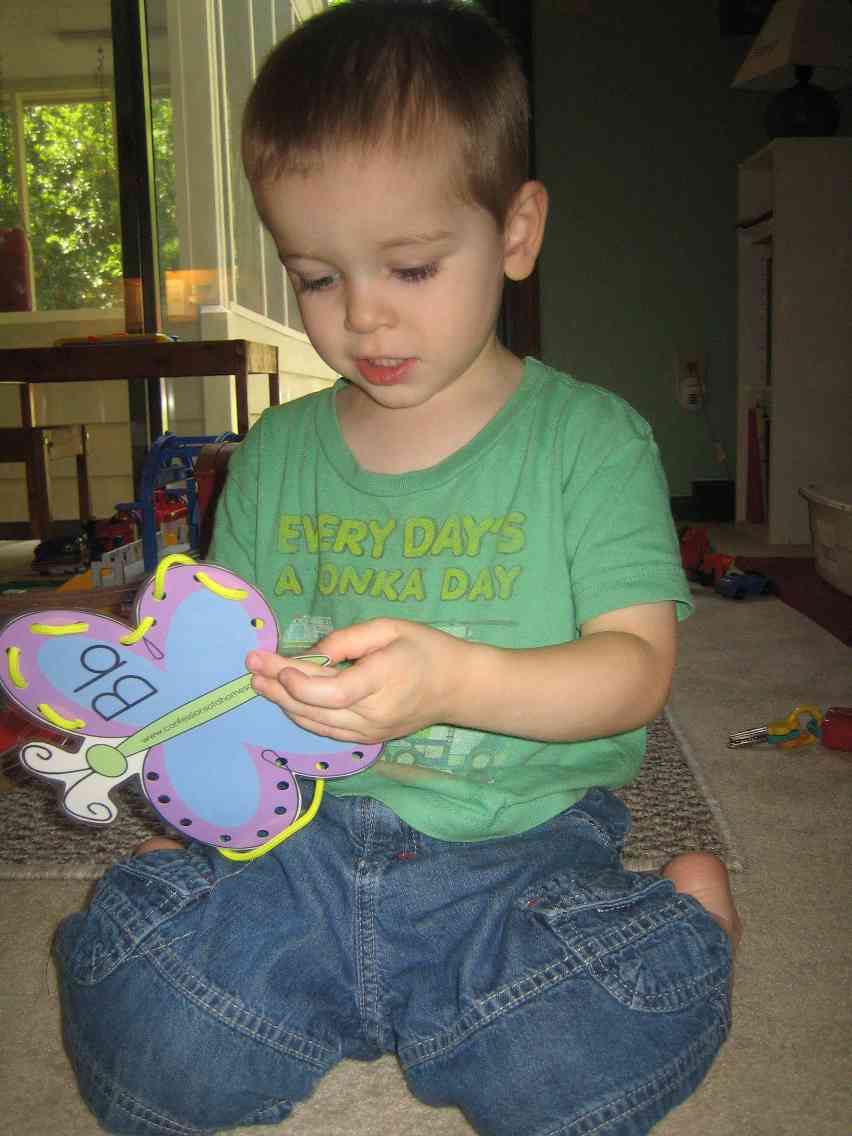 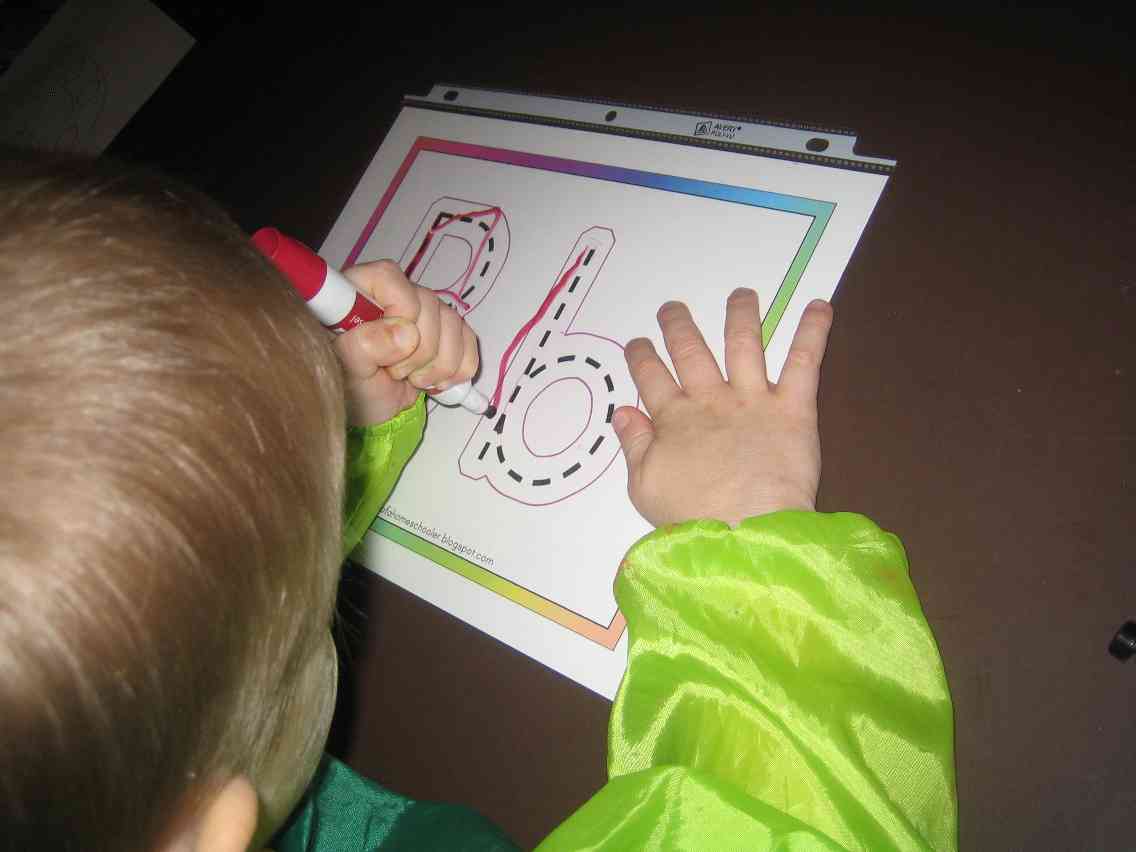 tracing the letter B 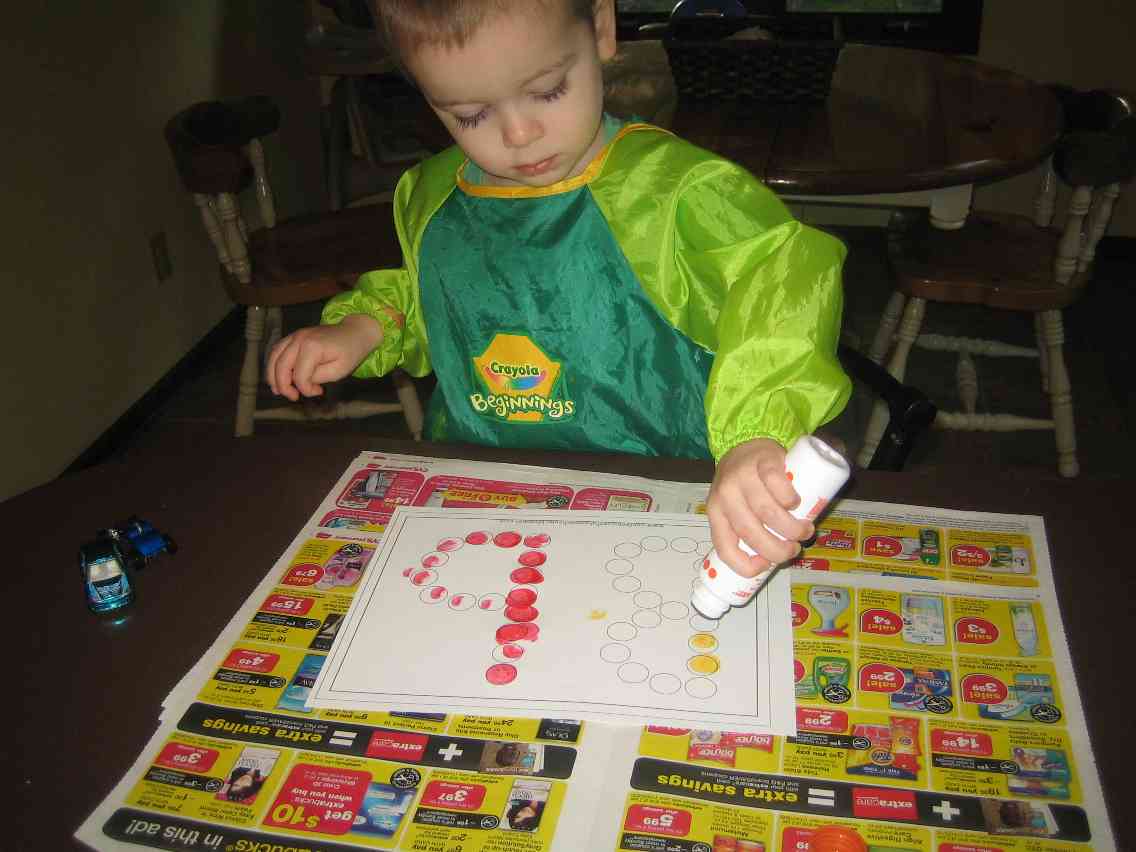 Do-a-dot Bb– this was his first time doing the dots in the circles and I was pleasantly surprised at how well he did! 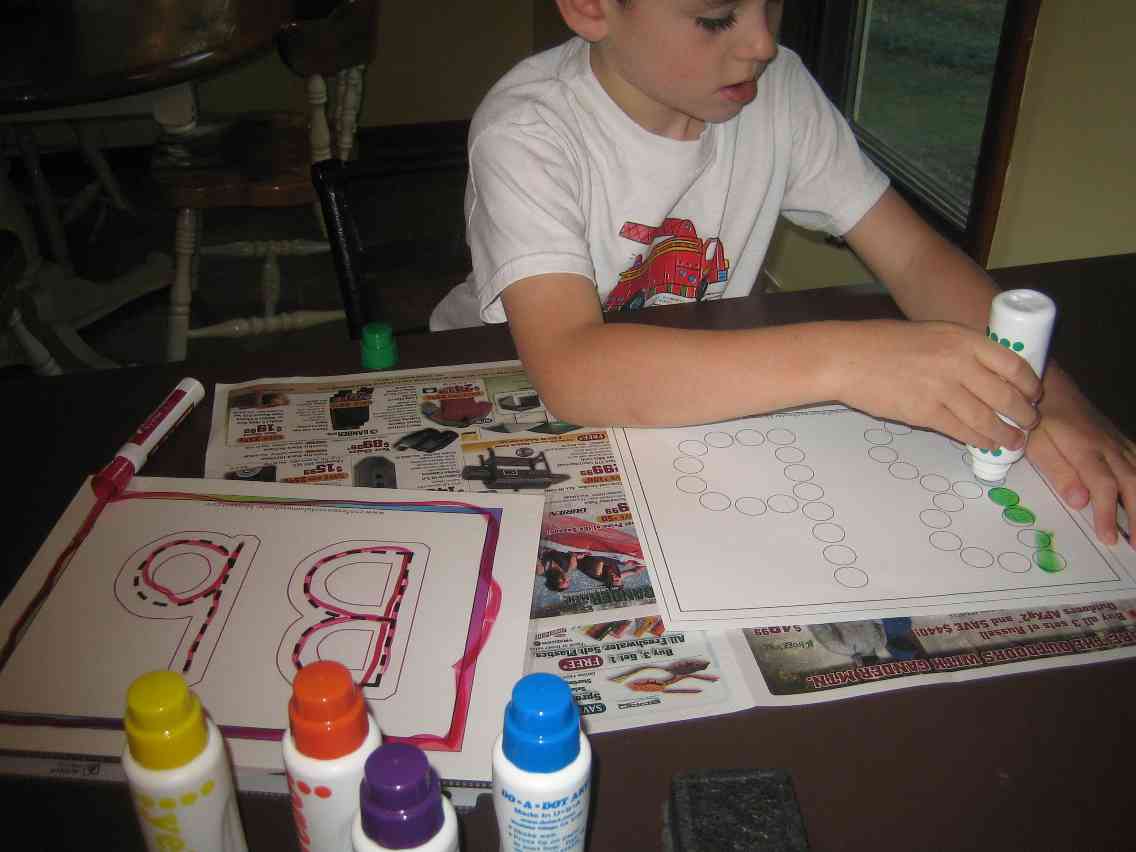 Since ALuv really wanted to do it, I had him trace the upper and lower case B first, using the correct strokes for the formation of the letter.  He then had to do his dots in the same order.  (Gotta integrate that handwriting whenever you can!!!)

The butterfly and letter B activities in the former pictures came from Confessions of a Homeschooler.  This mama is truly amazing…and so are her free printables! 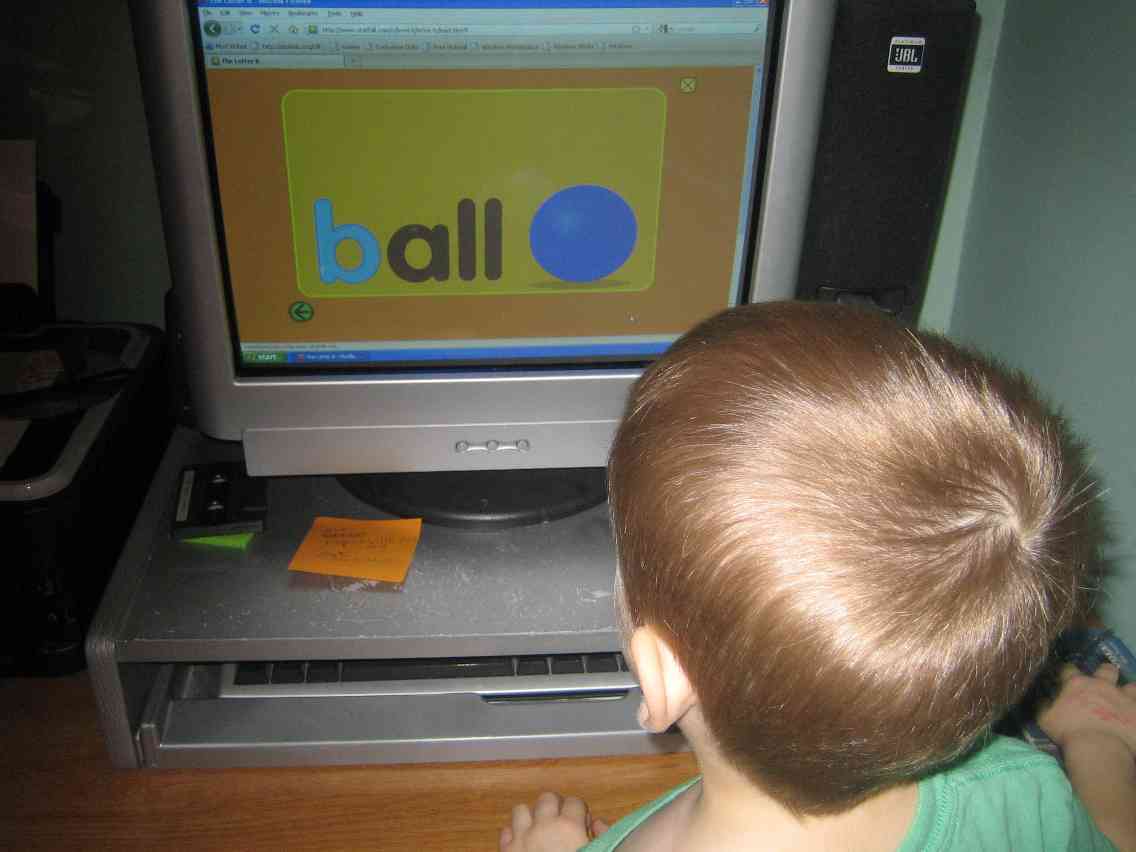 He also enjoyed the B Power Point show that Carisa created, but I didn’t get a picture of us doing that one.  You have to be a member to view it, but the membership is WELL worth it.  It’s only a one time fee of $15 and she adds new things quite often.

We sing a lot over here!  Both my boys LOVE to sing.  I use songs to incorporate literacy quite a bit.  One of our favorites with the letter B has been Bringing Home a Baby Bumblebee.  Another song we’ve sung for a few days is one that I adapted in my Christian Nursery Rhymes book: Ba, Ba Black Sheep. 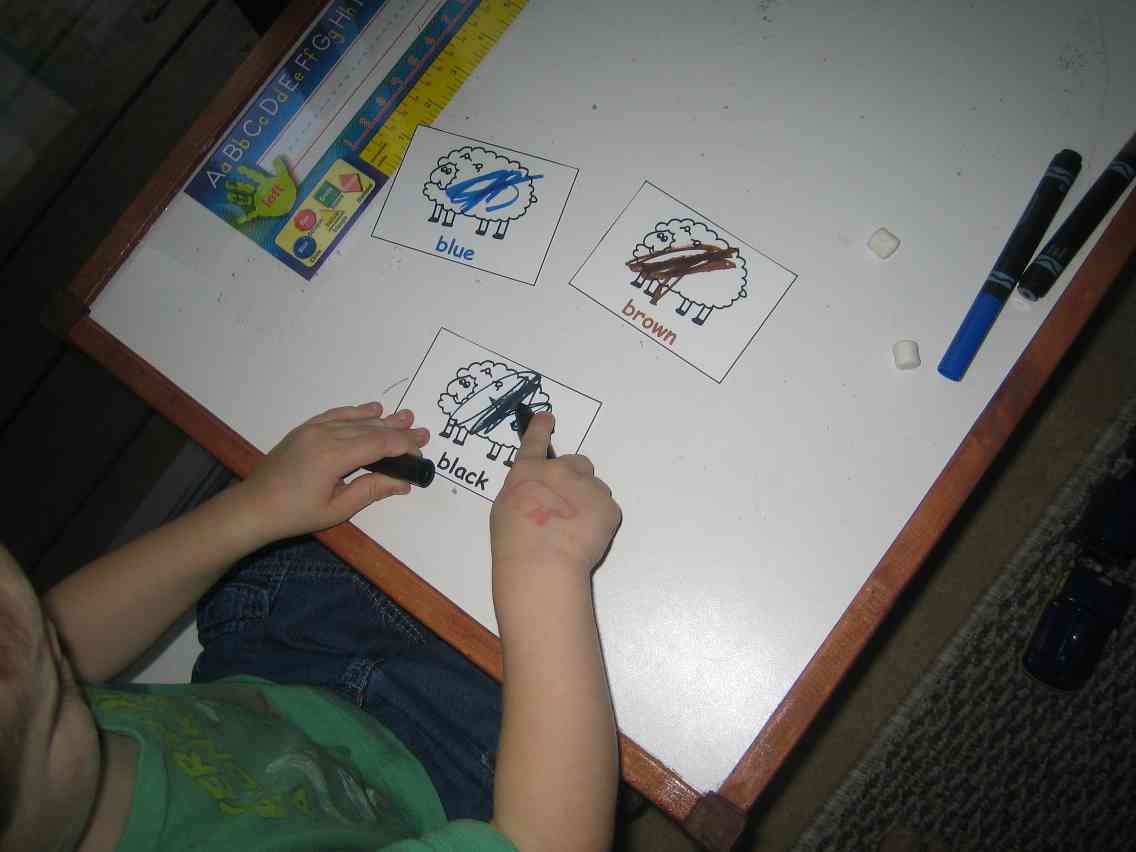 NJoy colored the sheep (I only had him color the black, blue, and brown sheep in his first sitting.  I demonstrated how these color names start with B.) 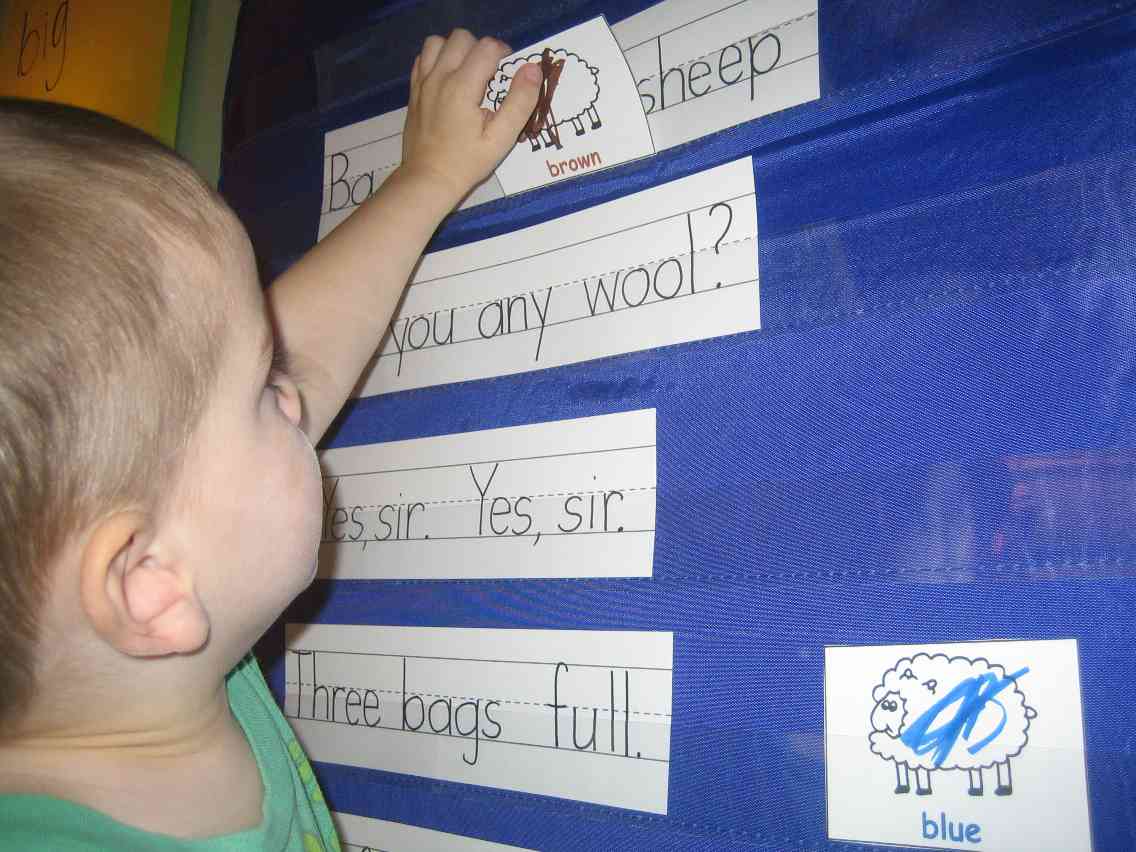 We sang the song, substituting a different color for black each time.  After seeing My Montessori Journey’s February poem on the pocket chart, I decided to put our song on our new pocket chart.  It worked nicely. 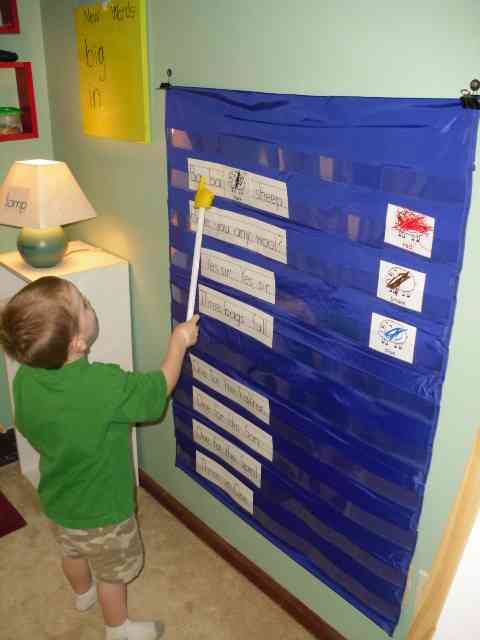 Pointing to the B‘s in Ba, Ba

As we continue to “do school” this summer, I’ll keep you posted on the things we do.  Thanks for following this reading mama!