I don’t know if your 100th day of school has already come and gone, but ALuv has been working on numbers through 100 in math.  We’ve done several activities with the hundred’s board, but I was mulling over the thought: How could I use the hundred’s board to spell words?  There’s no way all the letters to a word can fit on the board at the same time…hmmm…then, the idea hit me:

Hundred Board Spelling! (click to download)  My printable was made after ALuv did this, so it looks better than what I whipped up for him.

So, I got to work right away, plotting out ALuv’s math for the next day! 🙂  And here’s what he did: 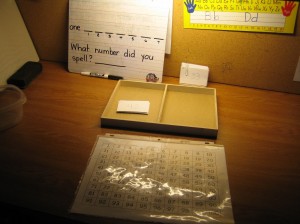 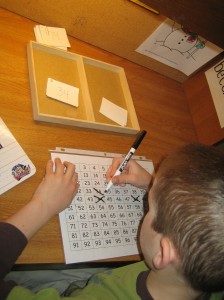 He picked a stack, went through and read each number card, & crossed off each number on his hundred’s board to form that letter. 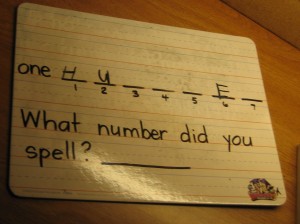 Once he discovered the capital letter produced from that stack, he recorded that letter on his dry erase board (remembering that each stack was labeled with a number so that he knew which blank to fill in).  He erased his 100’s board and worked through all of the stacks in same manner until he discovered the secret word.  He didn’t work through the stacks in numerical order. 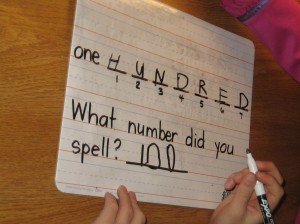 Then, he answered the question at the bottom: What number did you spell? (100)  Just so you know, it took him roughly 30 minutes from start to finish.

I think this would be a wonderful math center idea in a classroom and the modifications to it are endless.  Instead of spelling hundred, your child/students could cross off numbers that would spell sight words, word family words, classmates’ names, etc.

So, happy 100th day of school to you; even if you’ve already celebrated.  Thank you for joining This Reading Mama on a literacy journey!