Ever feel this way about teaching?  I know I did in the classroom and I sure do at home, too!  Sometimes it just feels like a 3-ring circus of hardly-managed chaos.

Last week was our first official week back into homeschooling after taking 2 weeks off from little NSis being born.  Monday of that week was AWFUL…so much so, that I really began to ask God if He was sure that His plan was for me to homeschool.  I was ready to throw in the towel and call it quits.

So, why am I telling you all of this??

Because I realized that I needed a little pow-wow with God concerning all of this.  I needed some wisdom concerning His plan!  And, as always, He gave it.  The two things He shared were things I knew in my head; just needed a reminder.

1. Instead of starting everyone with fresh (with new lessons on Monday) I could stagger my introductions.  This allows at least 1-2 of my children to do some independent work while I introduce something to the other.  Otherwise, everyone sits and waits for me to introduce their lesson before they can work, which equals frustration for everyone; especially me!  Maybe NJoy’s Letter of the Week curriculum could run from Wednesday to Tuesday or maybe ALuv’s new math concepts could start new on Tuesdays…I could site a bunch of different ways to do it, but you get the point.  (By the way, thanks mom for reminding me of this trick.)

2. Make use of independent work!  I went back and read my post on independent work and utilized the concept.  It took a little more planning on my part; but on Tuesday, I looked at all the things I wanted ALuv, NJoy, and MBug to do and figured out how I could rearrange them so that one person was always doing something he could do indepdently.  This worked beautifully! 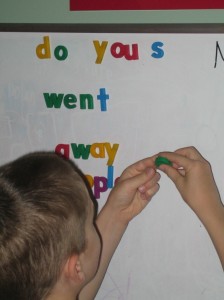 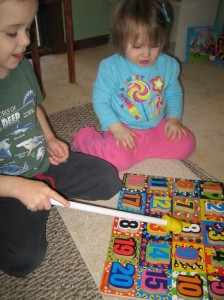 I was working with NJoy and MBug on a 1-20 puzzle. 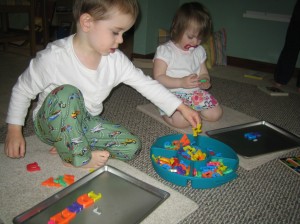 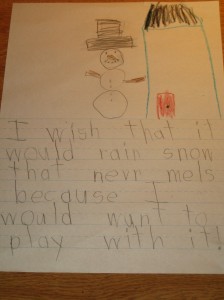 I was providing support as ALuv wrote in response to a prompt about rain. 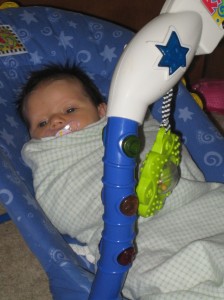 And NSis?  Well, she supervised!

It really is amazing what a little pow-wow with God will do for the spirit!  He’s faithful like that.

So, how do you do it?  Whether you’re at home or in the classroom, what “tricks” do you have that keep you from feeling like the circus has come to town?