I’m not a huge worksheet or workbook fan.  A lot of it comes from studying Montessori, but also from observing kids complete them as a classroom teacher.  The problem I have with worksheets is mainly two-fold: 1-they are typically unflexible and 2-they produce “cookie cutter” work.

I have recently, however, been exploring worksheets a little more now that I’m juggling the homeschooling of more than 1 child at the same time.  When I give a worksheet to ALuv on his level, he can do it independently; which means I can turn my focus elsewhere.  And some worksheets lend themselves nicely to some original work…once they get a “makeover”.  I’ll show you what I mean. 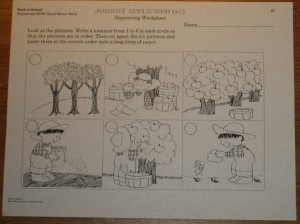 Take, for example, a typical Johnny Appleseed sequencing worksheet.  It can be made into a book.  The author of the book?  Your child/students.  (You can visit this site to download a free apple sequencing worksheet that you could use in much the same way as I did with this one.  Scroll down to Math and Science Activites and you’ll find Apple Tree Sequencing Cards.)

Here’s how we turned this worksheet into a book:

1. ALuv colored the pages while we were waiting at a doctor’s appointment for MBug.

2. That afternoon, I read Johnny Appleseed by Steven Kellogg to ALuv. (I adapted much of the language, but it helped introduce who Johnny Appleseed was.)  Afterwards, he cut out the pictures as we talked about what was happening & sequenced what came first, next, etc; writing the number in sequence on the back of each picture.  Each picture was glued onto one page of writing paper. 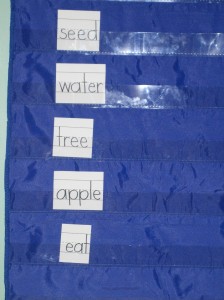 4. The next day, we looked at each picture and reviewed what was happening.  As he said words like, “seed” or “tree”, I showed him the words that I had on the pocket chart.  These words were targeted because they weren’t words he knew how to write independently, but he would need quite a bit to make his book. 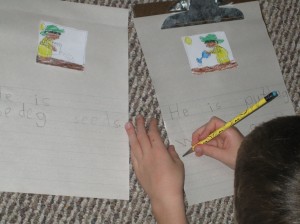 5.  He began writing his book, starting with the first picture.  I wanted him to be as independent as he could with this activity, but more importantly I wanted him to be able to read his own book, so he invented the spelling of many of his words.  I was highly impressed with the level of his phonemic awareness!

His pages said this: (he did three pages a day)

Once he had his pages complete, I stapled red construction paper on the front and back to make a book.

Finding the Main Idea by Choosing a Title

I asked him what a good title would be for the book.  He suggested, Picking Apples.  “Hmmm…,” I said, “but that only happened on one page.  What would be a good title that tells us what the whole book is about?”

He wrote his title and the book was finished.  He made sure he read it to NJoy, telling him all about how Johnny Appleseed planted apple trees.  I wish I’d taken a photo of that!

*If you’re a classroom teacher, worksheets like this lend themselves perfectly to differentiate instruction.  Those who can write more, do.  And those who cannot write as much can label the pictures or write text with teacher support.  Even more fun in the classroom is hearing the kids pick their own titles and read their books to each other.