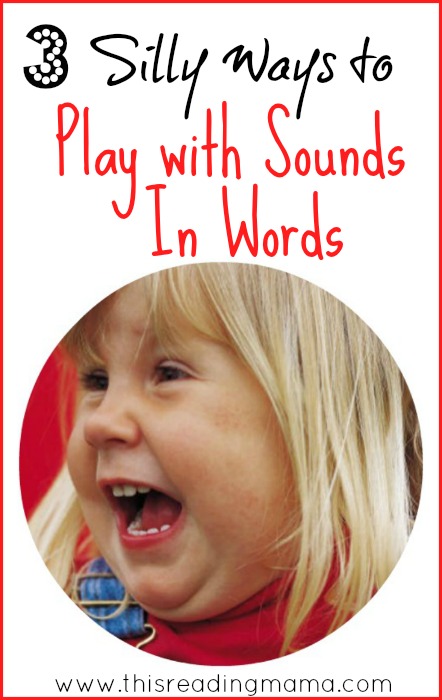 The ability to play with sounds in words is such a vital part of learning to read. For example, in order for young children to change map to cap, they need to be able to take apart the individual sounds (or phonemes) in the word and then blend another sound on the front. The same is true when changing cap to can, except this time, the sound (or phoneme) that needs to be changed is the final sound. Here are three simple and SILLY ways to play with sounds in words.
*This post contains affiliate links.

Raffi’s song Willoughby- Wallaby Woo, from Singable Songs for the Very Young, is a super silly way to manipulate beginning sounds in words.  I’ve yet to meet a child who hasn’t laugh his way through it; especially when the elephant sits on him!  Adapt the song by substituting your child’s name or other names of people in his life (For example: “Willoughby-wallaby Wecky.  An elephant sat on Becky!”).

I used actual letters in this activity, mixing in some phonics work, BUT you can do the same activity without any visual letters; just sing in the car or while swinging together outside. 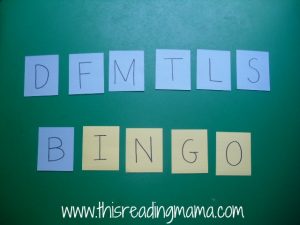 To prepare ahead of time, I cut several index cards in half.  Write out the letters B, I, N, G, O; then pick a few other consonant sounds.  I chose to color code the onset (B) from the rest of the letters as a visual aid, but this step isn’t necessary. 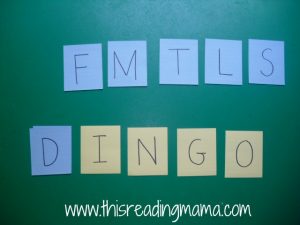 First, sing the song together the original way.  On the next verse, model how you can replace the /b/ sound with another sound.  Then, “read” the new word.  Sing the song again with the new beginning sound-DINGO.  Continue in this manner with the other consonants you’ve chosen.

Instead of Silly Sally going to town, your child can say the rhyme this way, “Silly Sim went to town, walking backward, upside down.” (for Tim) or “Silly Saddie” (for Maddie).  Simply replace the first sound of the child’s name with a /s/ sound.

To take it a step further, you could copy the sentence on lined paper (with space for a picture at the top) “Silly S________ went to town, walking backward, upside down.” The child writes his own name, remembering to take off the initial sound and replace it with an s. The child then draws a picture to match on the top of the paper.  If this is used in a classroom setting, each student could contribute their page to a Silly Sally class book.  Sow, sat’s silly!

What are some simple and silly ways  you play with sounds in words?

More Resources for Playing with Sounds: