It all started about two weeks ago.  We were outside playing with sidewalk chalk when out of the blue, NJoy (currently 3.5 years old) announced, “I’m gonna write my name!”  I was skeptical at best because, even though he’s been able to read and spell his name aloud for some time now, we had not begun to work on writing his name.

He grabbed a piece of chalk.  I watched, while somewhat holding my breath, and…HE DID IT!  He even began with a capital N followed by all lowercase letters.  Was it perfect?  No, but I was a.m.a.z.e.d.  You better believe I was jumping up and down, looking quite like a fool to anyone who would have seen me.

His smile said it all.  He had written his name.   He had arrived as a writer.  His writing now carried with it meaning…and an important meaning at that–his name!

Since that day, he has used any excuse to write it as often and wherever he can. 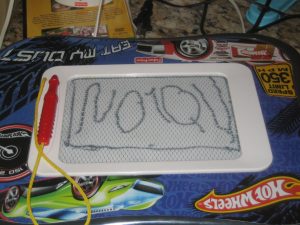 I shared this picture on FB from rest time this past week. 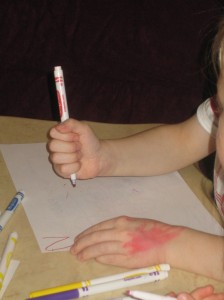 At a homeschool get together, he wanted everyone to know that the paper he had colored belonged to him.  He demanded everyone’s attention as he wrote his name on the back of it (love the pencil grip, don’t you?).  Then he held it up for all to see as he read his name. 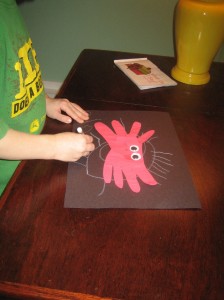 When asked the name of his spider creation, he quickly replied that the spider would have his name, “I can write it for you.  See?”

I LOVE it!  These are the moments as a mom that I truly savor; especially since I’m his teacher, too.  What a joy and an honor that I get to see it first. 🙂